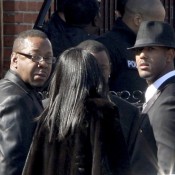 After a star-studded homegoing ceremony  — Whitney Houston was finally laid to rest nearly a week after her untimely death.

The ceremony was not without a few mishaps, mainly the absent seat located next to the late singer’s daughters— Bobbi Kristina Brown. Her father and the ex-husband of her mother, Bobby Brown, arrived but failed to stay for the ceremony. The  Rev. Al Sharpton tweeted that he tried to calm Bobby Brown down because the day was about Whitney.

Brown later released a statement saying that he abruptly left the funeral due to seating constraints –he showed up with a 9-person entourage.

“My children and I were invited to the funeral of my ex-wife Whitney Houston. We were seated by security and then subsequently asked to move on three separate occasions. I fail to understand why security treated my family this way and continue to ask us and no one else to move. Security then prevented me from attempting to see my daughter Bobbi-Kristina. In light of the events, I gave a kiss to the casket of my ex-wife and departed as I refused to create a scene. My children are completely distraught over the events. This was a day to honor Whitney. I doubt Whitney would have wanted this to occur. I will continue to pay my respects to my ex-wife the best way I know how.” ‘

I find it LUDICROUS that he would attempt to rain on Whitney’s parade. Many people are viciously running Brown’s name through the mud, but let’s think about what Whitney would have wanted. She once called Brown “the greatest love of my life'” so people trying to stop this man from grieving for his ex-wife is just absurd!

It’s also been rumored that he’s being kept away from his 18-year-old daughter. In a time of mourning it’s important to be kept close to objects of comfort, and for such a young girl I’m almost positive this includes her father.

What’s the real issue at hand here? Does this man not have the right to mourn Whitney? Like it or not but yesterday was about celebrating her life and I think that she would want Bobby included in that process.

There was also a huge uproar about Aretha Franklin who bailed out on the ceremony to rest up for  her own show at Radio City Music Hall later that night.  I’m not sure what internal issues they faced but that’s a pretty sorry excuse.

She had this to say in a statement:

“Regretfully, I am so sorry that I was unable to be with you at Whitney’s service today. I had every intention of being there. But unfortunately I had terrible leg spasms and locked leg muscles until 4:00AM this morning following my concert last night, which I’ve been having for the last few days. I feel it necessary and very important to stay off my leg today as much as possible until concert time this evening. My heart goes out to my dear friend Cissy, Dionne, Bobbi Kristina and the rest of the family. May God keep them all.”

I’m just wishing that they would have saved the drama for after her funeral.

Do you think that it was necessary to bar Brown from the funeral? Are you buying Aretha’s story?