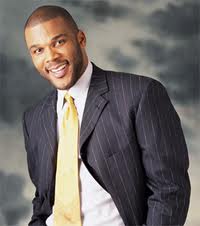 Tyler Perry always takes a different route to work to prevent people from following him.  His studios are actually 5 minutes away from my home.  Our neighborhood  use to be predominately/historically Black-but now things are sort of changing.  I was sitting at the light last night, look over next to me and a non-African-American person waived,  hello.  WOW!  I said welcome.

In route home  this week Tyler Perry made an illegal Left-Turn and was prepared to receive the ticket.  However,  he wasn’t prepared for what was the drawn out questioning the police officers were about to conduct.  The interrogatories were inappropriate and really uncalled for in the middle of the night. This could have really go ugly, but God intervened and another Black police officer came by and put a stop to the rhetoric. If not, I am mightly afraid Mr. Perry coudl have been hurt or arrested.  Madea would have really went to jail.

Two White Police officers interrogated him and banged their baton on his passenger side window telling him to role the window down.

When the third officer who was African American pulled up he identified him as Tyler Perry and they let him go. I guess now we know that all people don’t patronize Tyler Perry shows/movies.  If you know what I mean.

Racial Profiling IS REAL! We can all admit at one point in time in our lives our own stereotypes have played a role in our thought processes and actions.  Whether we were alone in the parking lot and we saw a suspicious person or we saw a disheveled person shopping in an expensive store at the mall.  It is human nature for us to categorize and try predict future actions of people.  It is a simple defense mechanism, regardless of whether or not  it is considered morally wrong.

The question is how do we control our unconcious thoughts not to dictate our actions.  Regardless of how we may perceive someone we must always be mindful and respect them as human beings.  Whether we trust or respect someone should not be dictated off of an outward appearance.  What many people do is take the FACTS and in their mind turn them into a STORY.

For example: The FACTS were Trayvon Martin was a young African American male, walking home, dressed in a hoodie, with a bag of skittles and Arizona Ice Tea.  The STORY was a thug was casing houses to rob, dressed in disguise, with some form of weapon on him. As you can see, it is very easy to take the facts and turn them into our unwarranted perceptions.

The Atlanta police department’s Office of Professional Standards is looking into Tyler Perry’s racial-profiling claims. The fear is that we don not want Tyler to leave this area.  He is certainly stimulating the economy and doing a great job in this town.

Thanks for stopping by agian,