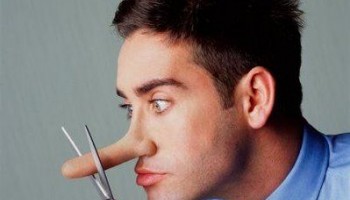 Ladies, you ever catch your man in a lie? Or suspect some foul play after hours? If you ask him a direct question and he fumbles for the answer, he purposefully avoids eye content when talking to you or his timeline doesn’t match up, look out for a growing nose on his face because it will appear any second with the fountain of lies he’s currently drowning in. Check out my top ten lies from least to greatest, that men tell from little white lies to those unbelievably fabricated stories he’s made up to throw you off track.

Ladies you have to question a man that has a whole lot of God-Sisters and Play Sisters.  This is an old but nasty trick. Sister can mean a whole lot of things including a bedtime partner, if you know what I mean.  The next time he tries that, ask him to see some family portraits.

9.  That’s just my “baby mama.” What does that really mean? You might just be a fool if you allow your man to keep going over there for extended periods of time to see his child. Yes, you want him to have a relationship with his children, but probably NOT with his baby’s momma. Old ties never die and don’t you forget it!

8.  I went to church last night. Unless he is sanctified that is usually a lie. Truth be told most holiness churches have stopped having multiple services during the week.  It could be because of the recession. Gas and light is sort of high. Don’t let the devil fool you.  Invite yourself to Bible Study with him one night. How bout it!

7.  I did not have any gas to come over yesterday. If he can get to work, he can get his sorry you-know-what over to your house to change your oil. Listen for some of those excuses that just don’t make sense.  He may be just using you for an occasional booty-call. What is worse you may just be doing the same. Require commitment and loyalty.

6.  I laid down and when I woke-up it was just too late. We really like telling this lie. I was oh so tired. I just couldn’t make it out of bed. I woke-up this morning with my work clothes on from last night. If this is true-he probably stinks and let him stay at home. Otherwise, tell that brother to wake-up and take you out to dinner.

Ways to Tell If a Person is Lying — powered by ehow

5.  I had to do overtime. If he is doing overtime, make sure that he spends some of that money on you. Drive-by his job if it will decrease your anxiety.  However, you must be prepared if his car is not in THAT parking lot. Overtime should equal more cash flow to you! How bout it!

4.  I am NOT gay! If he gets too defensive when you ask this question-be convinced. Ladies most of you know a brother that loves other brothers.  You cannot change him.  You can try, but it may be pretty hard.  If you decide to move forward with the relationship don’t be surprised we he can’t function sexually. You knew what he liked before you married.  Can a leopard change his spots?  Only if he truly wants too.

3.  I LOVE You. If these words come out too  early be AWARE! People can play on your emotions if you are NOT careful.  To love you, I must know you. Enough said!

2.  I had to do something for my mother/sister.O.K.? What did you have to do? Start your interrogatories. If you let him get away with one lie, he will continue throughout the relationship. Stop it early.

Now you really need to get my ebook, “Am I in a Bad Relationship?” I am sure that it will be helpful. Just click on the link to go to the landing page.

Is this list complete? Did I leave out some of your favorites? Which one do you think is most popular? Does your boyfriend tell lies? Let me hear from you? Brothers keep your hats on, The Top Ten Lies Women Tell is on the way!