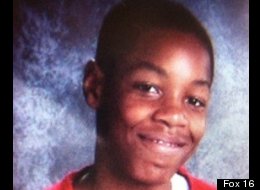 An Arkansas man walked into his home one night and saw a person on his couch with a blanket over him.  So he assumed that it was his sleeping cousin.  After a few hours past, the man realized that the boy wasn’t his cousin.  In fact, it was a 14-year old boy who the man had never seen before.  The man picked the boy up and noticed that he wasn’t breathing.  Someone immediately called 911, and when the police arrived, they found the 14-year old boy lying face up on the ground.

Officials found blood on the boy’s face and chest, and as medics lifted up his shirt, they found what looked like a bullet wound.  After investigation, the police determined that the 14-year old, TyJuan Woodard, and his friend were playing with a gun in the room.  Accidentally, the gun went off and shot TyJuan in the chest.  The younger boy had covered him up with a blanket, then left and spent the night somewhere else.  However, the younger boy did not tell anyone what had happened.

Police asked the poeple in the home if they had ever seen the young boy before.  They all said that he was a stranger.  Investigators found out that the boy lives elsewhere and recently ran away from home.  A woman claimed to be the 13-year old’s grandmother, and she said, “He said he was scared, but I wish he had told me, told me something.”

The woman said she had never seen the boy before the night he was found laying in her home.  She said, “All she could see was blood.”

Lt. Terry Hastings said that he did not know how the boys had gotten hold of the gun, which belongs to one the 13-year old’s relatives.  Hastings also said that there were no charges filed, but the case will move on to the prosecutor.

There are a couple things that need to be addressed here.

First, the gun was obviously not stored in a discrete place if a 13 & 14-year old could find the weapon.  The younger boy should not have known where to go to retrieve the weapon.  In the same manner that we wouldn’t let a thirteen year old get behind the wheel of a car alone, he should not have been in possession of a weapon of equal force.

Secondly, the media plays a huge part in this incident.  Society likes to portray rising generations that certain things are “cool.'”  For example, society shows that teenage pregnancy is a celebration.  Giving out tv shows like “16 & Pregnant” and “Teen Mom” like free candy at Wal-Mart.  It is no different than showing action filled and vulgar movies like Wanted and Mr. and Mrs. Smith.  How can you show a child that a certain act is okay in the movies, and expect their minds not to wonder.  It does not add up.  So, to a certain extent the teenagers can not be blamed her because they are very naive to the damages of a gun and to them it was “an experiment.”

Was the 13-year old responsible?  Show he be sent to juvenille?  Leave me a comment below stating your side of the argument.