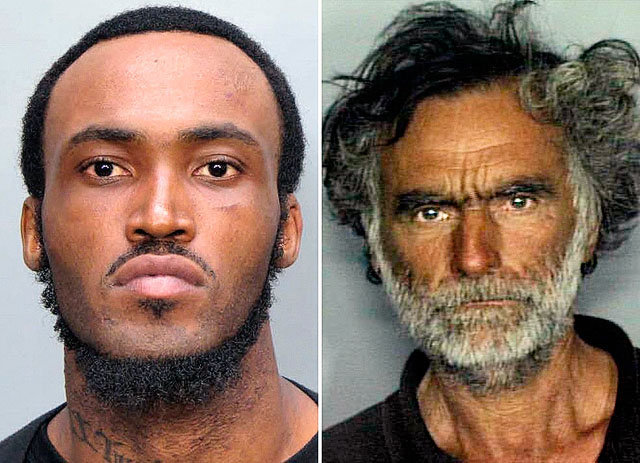 Police sources have identified the homeless man that had his face eaten off by a naked North Miami Beach man.  Ronald Poppo, 65, finds himself in critical condition at Jackson Memorial Hospital’s Ryder Trauma Center, which is located blocks down from where he was attack by Rudy Eugene, 31.  The attack happened on the Downtown off-ramp of Miami’s MacArthur Causeway in broad daylight.

According to CBS, Poppo’s arrest records were consistent with petty crimes commonly committed amongst the homeless and showed that he has lived in New York City and New Orleans, but spent a great deal of time in Miami since 1978.  His last charge was made in 2006 for trespassing.

Apparently, this is not the first time that Poppo has been seriously injured downtown.  The Miami New Times reports that Poppo was shot in Miami’s Bayfront Park in 1976 by an unidentified person, and spent five days at Jackson.  His address at the time was a local Salvation Army.

Grotesque photographs circulating the internet suggests that if Poppo survives the attack, then he would do so without much of a face.  According to CBS, the hospital has failed in its attempt to contact any of Poppo’s family members.  That is a sad case when one is on his deathbed and cannot reach any of their family members.

Vice President of the Miami Fraternal Order of Police, Sergeant Javier Ortiz, told the press, “It was not only grotesque, it was just very sad, the amount of blood.  It was very sad to see what happened to this gentleman that had his face eaten.”  Miami Police have realized very few details in which Eugene was shot and killed.  But an eyewitness spoke with WSVN saying that he was riding his bike and came across Eugene, stark naked, chewing off Poppo’s face, and flagged down the police officer.  The surveillance video shows that the attack had gone on for about 18 minutes before the police arrived.

Larry Vega eagerly told WSVN, “The guy was, like, tearing him to pieces with his mouth, so I told him, ‘Get off!’ The guy just kept eating the other guy away, like, ripping his skin.”  He went on to say that when the police yelled for Eugene to move away, the naked man raised his head “with piece of flesh in his mouth,” growled, and began chewing again.  The officer then fired a shot at Eugene, he ignored him and continued chewing, the officer fired multiple shots until he was dead.

Investigators suspect that Eugene was suffering from a drug-induced psychosis, probably by an LSD-like new drug called “bath salt.”  Cassandra Metayer, someone who went to high school with Eugene and whose cousin was previously married to Eugene, said that the attack wasn’t consistent with his personality.  The drug, or any other similar drug, could explain the opposite behavior the victim and officer received from Eugene.  Metayer continued to place Eugene in good terms by claiming that he was a “ready-to-help-anybody kind of guy” and he was a really nice person.

Many say that this could be the start of the “Zombie Apocalypse.”  I’m not sure how accurate (or far gone) THAT statement is, but I will say that when someone is chewing away on another person’s face and does not react to being shot… something is terribly wrong here.  Either we are eating some really, really bad food and its altering our minds or the government isn’t keeping control over the drugs circulating illegally.  Along with many other innocent people, I am hoping that this incident was just a fluke and we won’t have to worry about ‘zombies.’  I’m pretty sure we don’t want to be stars in the movie “Zombieland.”

This is a serious topic, whether we want to recognize its severity or not.  Leave your comments below on what you’re thinking this is! Make sure you check out the video below.