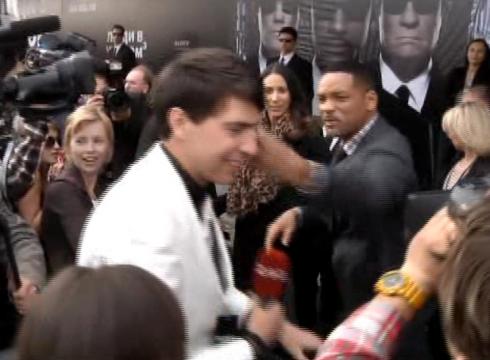 A reporter sees Will Smith, star in the upcoming movie Men in Black III, and wants to talk to him.  MIB III was premiering in Moscow where Will Smith was obviously on the red carpet.  As Will Smith approaches the reporter, he reaches in for a hug, success! Then the reporter tries to kiss Will Smith on the lips, FAIL!  Will Smith slaps the poor man!  Many things had gone wrong with this situation, but luckily it was only a split second of anger until Will was right back to his bubbly self again. Check out the video below!

Most say that the problem here is violence.  Some even go further to say that Will is gay; that which I have previously talked about ( http://askdro.com/2012/03/is-will-smith-gay/ ).  But sure.. he’s gay for NOT letting a male kiss him on the lips, it makes perfect sense!  There are three things we need to address here: 1) Will Smith’s character 2) Enigma (synonym: temptation)

First, the point here is that a well known actor allowed some reporter to take him out of his character, even if for a quick second.  Will Smith could have dealt with the situation a lot more “cooler” as he usually is.  But grant it that a complete stranger, not even the fact that he was male, attempted to kiss him on his lips.  I do believe that it had gone too far but maybe the reporter had heard rumors about Will Smith being gay and wanted to try it out for himself. But he was left embarrassed.

Will has to realize that he is a celebrity and there are type-crazy people out in the world.  I’m almost certain Will has run into his fair share of crazies through his acting career.  The aggressiveness after the hug and attempted kiss was normal, but can also be translated as unnecessary.  Will had already pushed the guy away from him, so the “pimp slap” (even though it was extremely light) might have been a little extraneous.  Will has to recognize that he was in a different country, with different traditions, and it could have been a greeting! I’m definitely not excusing the reporter’s behavior.  Maybe Will and his new lover should come see me for advice about anger management to avoid situations like this. LOL!

Secondly, the reporter was out of line.  Where does he connect that the nicest man in Hollywood would allow a stranger give him a peek on the lips?  That is bizarre!! Headlines hace shown rumors of being homosexual.  And even IF Will is gay would he really be focusing on his sexuality at the premiere of his new movie?  It doesn’t seem likely.  The reporter should have focused on his job, which is getting Will to talk into his camera and left it at a hug and “thank-you.”  But no, that was obviously too simple.

As always, leave me a post telling what you think.  And don’t forget to pick up my book “Am I in a Bad Relationship? Dating 101.”