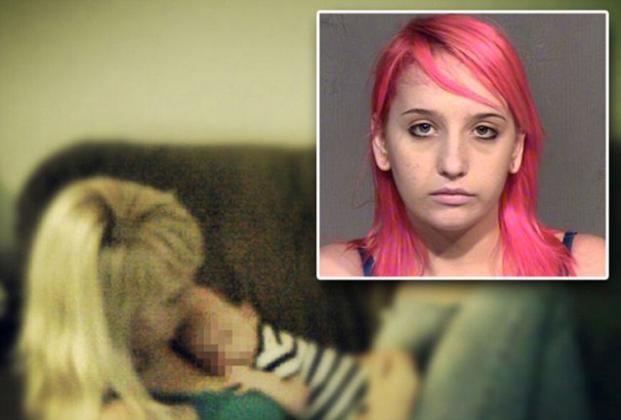 A 5-week-old baby boy was left in the center of a Phoenix intersection, according to police.  The question was then: how did the baby get there?

Police later found that the boy’s mother, Catalina Clouser, 19, was high on marijuana, and had put the boy on the roof.  She then drove off, forgetting the car seat was up there.  It slid off and she never noticed.  It wasn’t until she reached home that she noticed the child was missing.  Catalina called her friends, whose house she had just left, to trace the route she had taken.  The friends were too late; the officers had already found the baby.  When Catalina returned to the intersection, deputies arrested and charged her with aggravated driving under the influence and child abuse.

The car seat was fairly damaged but the child was miraculously unharmed.  Officer James Holmes said that the baby was “perfectly O.K.”  The 5-week-old is now in custody of Child Protective Services.

The series of unfortunate events all began when Catalina and her boyfriend were at the park.  They left the park to go buy more beer were Catalina’s boyfriend was busted for DUI.  Catalina, obviously upset about the arrest, traveled to a nearby friend’s house.  There she admitted that she went to smoke marijuana.  About midnight when she departed the home, she left the sleeping infant on the roof of the car!

Early Saturday morning, concerned neighbors saw the car seat in the road at the intersection of 45th Avenue and Chola.  They then called and informed the police.  Investigators say that the baby didn’t ride for long.  The car seat slid off in approximately 400 feat.  However, Catalina was 12 miles out before she had realized her tragic mistake.  She returned to the scene, where she was then arrested.

Maricopa County Superior Court announced that Catalina Clouser was released from jail Saturday night.  She was released on bond but it is unknown how much.  She is ordered to wear an electronic bracelet and isn’t allowed to drive with anyone under the age of 18.  Catalina has a preliminary hearing scheduled for June 20th.

My first impression of this story was: why is this woman out of jail?!  She should not have been granted bail.  Did we forget that she put her child on the top of the roof… and drove off!?  I don’t know, maybe I’m the only one that has not forgotten this.  I understand that it was “her” child and that it could be her first offense, but let’s be realistic! She was high on marijuana and her child is only 5 weeks old.  Not responsible at all!

Another question to be answered is: does race play a role in her releasing?  An opinionated person states how the woman’s race contributed to her receiving more leniency from the judge.  I will relate this back to an earlier post where a father pulled a prank on his toddler by putting him in the washing machine, accidentally starting the cycle.  The parents obviously were terrified as they got the employee to open up the machine.  Officials were hunting incredibly hard for the African-American parents, who were not on drugs.  But when a Caucasian female is souped up on marijuana leaves her 5-week-old infant on top of the car, she can walk away from jail… the same day she was arrested?  Something doesn’t add up here.

However, we are glad that the child doesn’t have any injuries and is in Child Protective Services.  Leave your feedback below on what you were thinking as you read this story.