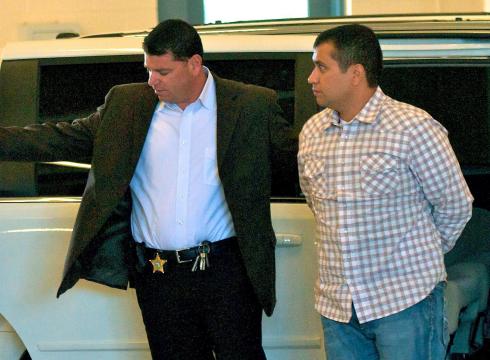 For those who have really been following this case, you would know that the judge denied bond and ordered Zimmerman back to jail.  The bond was $150,000 at the time.  Prosecutors have claimed that he and his wife deceived the court in an April bond hearing.  They lied to the courts in attempts to receive a lower bond.

At the day of the hearing, Zimmerman’s wife testified that they have limited funds for bail because she was in school full-time and he was unemployed.  They failed to mention, until 5 days AFTER the hearing, that the website they created had made over $135,000, in which calls between the couple proves.  This incident showed that Zimmerman was not trustworthy.  His legal team acknowledged such and commented that he would have to work very hard to fix it.  The judge was tolerating being lied to.  Therefore, he denied bond and put Zimmerman away… again.

But surprisingly, Zimmerman won’t be staying there for too long.  Fox news has reported that Zimmerman has a new court hearing date set for June 29th.  The former neighborhood watch charged with second-degree murder in the killing of Trayvon Martin in a gated community in Florida will now sit in jail for a couple of weeks.  Then he will walk, if the judge grants him bail.  Zimmerman and his supporters better hope that the judge sheds light on his lies and forgives him.

Zimmerman, charged with second-degree murder, pleads not guilty, claiming self-defense under Florida’s “Stand Your Ground” Law.   His dishonesty will place him in a hot boat.  He’s already being watched extremely because (thanks to him) there’s no second party to compare stories with.  Although he should have been totally honest from the jump start, now he definitely has to watch what he says to the judge.  If he’s asked certain information, it would be in his best bet to disclose it.

O’Mara says that Zimmerman and his wife, Shellie, reacted out of fear.  Since there lives have been turned upside-down they don’t know who all they can trust.  But when I learned that information, I couldn’t get one question from my head.  Is his attorney justifying his life?  Could he be walking behind Zimmerman covering all of his tracks to lead Zimmerman off as a  free man in the long run.  Numerous people, of all races, think that Zimmerman is a bold-faced liar.  They revert back to the racial slurs said in his 9-1-1 call to police when he reported a suspicious male walking in the rain.  Zimmerman intentionally ignored the police and pursued the 17-year old victim, Trayvon Martin, after receiving information to not follow.

Supporters from each side of the story have voiced their opinion.  So what is yours?  Do you believe that Zimmerman shot Trayvon Martin having received no threats?  Or was Zimmerman’s actions justifiable.  The choice is yours.

Leave your feedback below.

Dr. O
Also, check out my new book: Are You In A Bad Relationship? Dating101