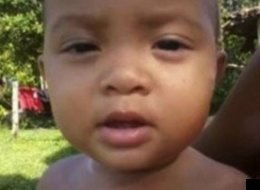 Woah! This story is bizarre!

A two-year old toddler, Kelvin Santos, had been battling pneumonia.  The boy went to Aberlardo Santos Hospital for some treatment.  Kelvin was declared dead after he stopped breathing with complications from his condition.  The family held an open-casket wake later that day.

An hour before his funeral, the toddler woke up in the casket and looked for his father.  He asked him for a drink of water before laying down in the coffin lifeless once again.     The whole family thought that they had witnessed a miracle, in hopes that Kelvin had came back to life!  A few seconds after, the boy’s body fell back in the casket and the family attempted to wake him up again.  It failed.

From there, the boy was rushed back to the hospital where he was pronounced dead, again.

Now, many of you reading this might feel very sad about the situation, but the father, Antonio Santos, seems to be dealing with it pretty well.  Antonio says to The Daily Mail, “Dead people don’t just wake up and talk.”  “I’m determined to find out the truth.”

I think that it was a tragic situation for the family.  For them to see the one that they love in a coffin, rise up and talk, then go back to sleep again has to do something to you.  Although they were shocked, and truly believed everything was okay, but when Kelvin fell back in the coffin their hearts had to have dropped.  That’s a scary situation and I wish them the very best.

This isn’t the only family that has witnessed a phenomenon as such.  A mother, living in Argentina, gave birth to a baby girl 3 months premature, who was later pronounced a stillborn.  The baby was put in a coffin and sent to a morgue.  Twelve hours later, the parents were able to open the casket and say their goodbyes!  Instead, they found their baby girl trembling.  Analia Bouter fell to her knees in shock.  The mother told the press, “I moved the coverings aside and saw the tiny hand, with all 5 fingers, and I touched her hand and then uncovered her face.”  Analia added, “That’s where I heard a tiny little cry. I told myself I was imagining it – it was my imagination. And then I stepped back and saw her waking up. It was as if she was saying `Mama, you came for me!’ ”

A morgue worker picked up the baby and confirmed that she was alive!  The family was filled with joy about the miracle, but plan on suing the Hospital Perrando for malpractice.

In reference to Kelvin Santos’ event, I believe that was a sign.  I absolutely agree with Antonio Santos that dead people don’t wake up and talk.  And surely they don’t ask for a drink of water!  This was a response, and I’m interested to find out what happened!

Well, what do you think?  What the toddler hallucinating from the drugs given to him while in the hospital?  Was it a coincidence that he spoke while in front of his family?  If so, do dead people talk every once in a while?