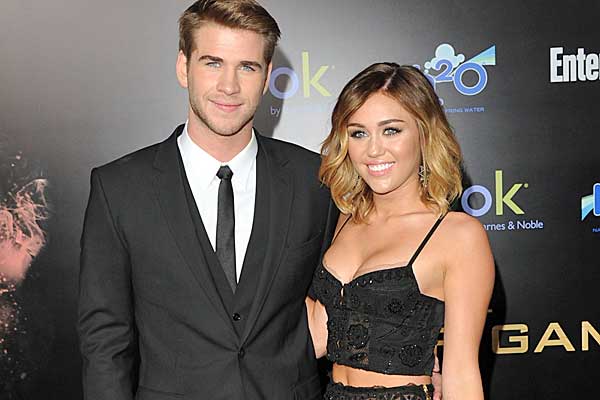 Teenage actress and country/pop singer, Miley Cyrus, is engaged to Australian actor, Liam Hemsworth.  Miley Cyrus, known most for her show “Hannah Montanna”, has been in the media for majority of her life.  First it started with her double-lifestyle television series on Disney Channel.  Then, her publicity began to be reared more to how she was growing up.  America had a rough time on letting go of that “little girl” image of her.  So when the teenage star started to wear more revealing outfits out on the red carpets, she received a “whore” stamp from society.

The teenage didn’t help by coming out with the song “Can’t Be Tamed.”  In addition to the straightforward content of the song, the video was very wild (which accompanied the title well).  In spite of her being the buzz of the town, she persisted with her career in music and acting.  On a movie set “The Last Song” she met Australian actor, Liam Hemsworth.  Like most girls, Miley feel for the guy but didn’t know if he liked her back.  So she paid co-star $10 to find out.  She claims that it was funny to see him go back and forth when she finally found out that he liked her too, of course!

In August, the couple saw troubling times when Miley tested Liam’s loving heart to the limit.  Their relationship headed for the rocks after a party.  Liam said that he felt Miley was acting too provocatively at a party in April 2010.  Miley had on tight shorts that accentuated her raunchy dance moves.  Liam was seen leaving the party very upset!  Perhaps, he was upset that Miley left no curiousity about what goes on in the bedroom.  LOL!

Their relationship went on a brief pause back in August 2010.  Since then the couple has grown inseparable!  They have gone from friendly bike rides to movie releases to arguments and finally land in holy matrimony.  Well… hopefully!  The two have yet to revealed any plans on their wedding.  I guess its just a joy right now to just be engaged.

After their three years of on and off dating, Liam finally popped the question on May 31st with a beautiful 3.5 carat ring by Neil Lane.  Miley was able to keep her excitement under wraps for about a week until telling People magazine about the recent events.  Miley said, “I’m so happy to be engaged and look forward to a life happiness with Liam.”

Although, many fans think that Liam is using Miley to gain publicity.  And if so, it seems to be working because he nailed a acting gig on the movie “The Hunger Games.”  The actress rebutled and insisted that they had love at first sight after he opened the door for her at “The Last Song” auditions!

Well, what do you think?  Is Liam using Miley or is it a coincidence that the couple got together and he instantly popped off?

Leave your comments below!  And be sure to check out the video of Miley & Liam below.