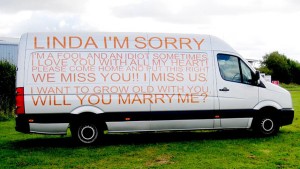 An anonymous U.K. man poured his heart out to “Linda” on the side of a van.

The mystery couple was apparently having some trouble in paradise because “Linda I’m sorry” was sprawled out in bright orange letters and “please come home and put this right”.

The apology then turned into a marriage proposal right above the wheel of the vehicle. No information has been discovered on the outcome of this love story but the Press Association reported that the bold statement has caused some distraction in the Shildon, County Durham of the U.K.

AP-Traffic has backed up significantly because of onlookers and people pausing to take pictures. Friction is also underway between the employees who work outside the estate the van was parked at due to the speculation of “Linda” and her love woes.

An innocent confession of one’s love or a desperate attempt to save the relationship? Tell us what you think!