Relationships come in all shapes and sizes. The relationship a child has with his/her father can be one of the most productive relationships in life. What constitutes a father? We’ve heard the cliché that making a child doesn’t make you a father.  It is true. Without the work and commitment to that life you may as well say you are a man who has gotten a girl pregnant, a baby maker. 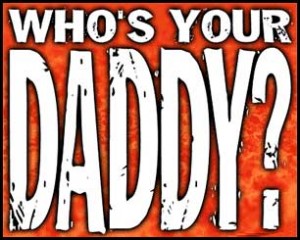 Some years ago the stations were playing a song “Baby Daddy”. The young man asks his girlfriend who is the man that’s been hanging around. She replies, “That’s just my baby’s daddy”. To be reduced to someone as insignificant as a “baby daddy”, some schmuck who simply fathered her child denigrates him. To the young and old a child will always need his father.

What happens to the relationship when the father has been absent for several years? The tendency to replace the real father with a substitute or step dad enters the equation. While dining at a restaurant this conversation between an older woman and a child (perhaps a grandparent and a grandchild.) was overheard.  Woman: “Have you talked to your daddy lately?” Child: “I don’t have a daddy, but when I grow up I’m going to be a good daddy.” This child’s statement could be indicative of the fact that the mom or other adult in the home is trying to help him deal with the fact that his dad is not around. But more importantly the adults could help him cope with the absence of his father by not telling him he doesn’t have a daddy.

The research considered “data concerning the phenomenon of absent fathers in children, and to prove the hypothesis that absent fathers are conductive to a wide range of negative and unfavorable factors having negative impact on psychological, physical, moral and ethical development in children with absent fathers due to various deviance and pathological aberrations in psychological and psychosocial aspects of the child’s image of ‘the self’ as a personality, as well as the attitude to the parents of a child with absent father in comparison with children in families where two parents are present.”

Although this phenomenon occurs more frequently in society, there must be a remedy to combat the effects of negative behavior of children with absent fathers. The angry child syndrome can be tackled via various humanitarian agencies. Some agencies to consider for seeking help for your child might be: The Boys and Girls Club, The YMCA, The YWCA, youth counselors at church, recreational centers where adults are on staff, sports clubs, and neighborhood after school programs. A child’s healthy sense of self can be nurtured here. The sting of an absent father can be less biting when others step in to help out.

For more information on relationships, check out Dr. O’s new book, “Am I in a Bad Relationship?” .