Obama supporters have done it again. The 44th President of the United States has been re-elected for another four years! If you were tuned into radio stations and glued to your TV sets like I was, then you know how the presidential race was giving us some back and forth elements. “Yay! Obama won this state. Oh no, he lost that one”. “Romney has the lead with this demographic and region of the country” and so on and so on. It was a long night of intense impatience but in the end, the people’s choice won.

According to Yahoo News: 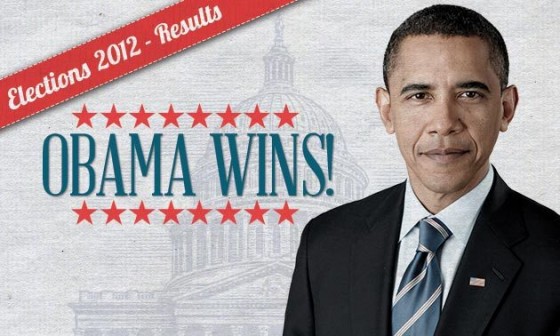 It was a sweet victory for Obama, but nothing like the jubilant celebration of four years earlier, when his hope-and-change election as the nation’s first black president captivated the world. This time, Obama ground out his win with a stay-the-course pitch that essentially boiled down to a plea for more time to make things right and a hope that Congress will be more accommodating than in the past.

No president has been perfect and we’ve certainly like some more than others. Obama has come through on some of his promises he informed the people of in 2008 but not all have come to pass. With his second term in motion, now we have a chance for him to work towards finishing the job he started.