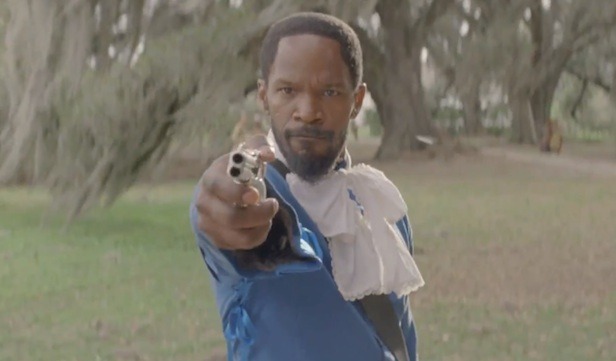 Yes, the content in movies can influence people’s actions. Movies can inspire people to help others. They can inspire people to discover their dreams and they can provide people with the confidence to do something out of the ordinary. Even though some may have a greater affect on others, movies are not restricted to only fueling violent actions. A good movie is supposed to evoke some sort of emotion out of its audience but it wouldn’t be fair to the people responsible for making them to blame movies for people committing serious violent acts.

All around entertainer, Jamie Foxx, is the star of the upcoming slavery flick “Django Unchained”. Although the movie has yet to make its official release, I’m sure we can expect some violent footage given the subject of slavery and with its creator being Quentin Tarantino (Kill Bill volumes and Pulp Fiction).

According to the Huffington Post, Foxx acknowledged the fact that movies do indeed influence people. “We cannot turn our back and say that violence in films or anything that we do doesn’t have a sort of influence,” Foxx said in an interview on Saturday. “It does”, said Foxx.

If an individual has made up his mind to commit a mass murder, the current action packed, suspense thriller movie shouldn’t be blamed if he succeeds in carrying it out. Movies with gun shots, bloody bodies, car chases and explosions are being made year round with no knowledge of some deranged individual looking to shoot up a theater on the night of its debut. The decision to murder a mass group of people was more than likely pondered upon and sought out way before  a particular movie hit theaters.

The Huff Post also reported that Tarantino was “tired of defending his films each time the nation is shocked by gun violence. He said “tragedies happen” and blame should fall on those guilty of the crimes”. I agree. Tragedies happen every day, not just in this country but all over the world. In fact, 22 children and an elderly woman were stabbed outside a school in China on the very same day as the Newtown, Connecticut elementary school shooting.

At the end of the day, movies are created for our enjoyment. They’re meant for entertainment, to help us think about prevalent issues in the world, make us gasp for air from too much laughter, and appreciate who we are in life through their characters. After those two and a half hours are over, we get up and go home to our everyday lives. So, don’t just blame today’s or tomorrow’s tragedy on the content of a movie. Instead, analyze the person responsible and the events that led up to them executing a horrific “movie influenced” plot to take lives.