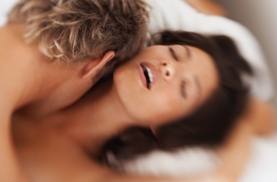 Intercourse is meant to be enjoyable for both parties. Your partner learns what you like and vice versa, which creates an intimate experience that both partners share to enhance their relationship.  Sexual arousal or satisfaction is catered to the individual  based on the actions of someone else. So what do you do when you don’t need that other person to “satisfy” you and that satisfaction never ends?

Gretchen Molannen, 39 suffered from  “persistent genital arousal disorder” a rare disorder that left her unable to function normally in society for 16 years. In the video, she stated that she once had 50 orgasms in a row. She was found dead in her Spring Hill, Florida home after committing suicide last week.

As reported by The New York Daily News:

The New York Daily News reported that Molannen, had previously made other suicide attempts such as slitting her wrist and breathing in carbon monoxide even though she said she didn’t want to kill herself.

“This isn’t living. I think about suicide all the time. It doesn’t mean I want to do it,” Molannen told the Tampa Bay Times. “I don’t want to do that. I want to enjoy life. I used to love life”, said Molannen.

She expressed that being intimate with someone  terrified her and that she compared her condition to a man having an erection.

“Imagine having an erection that does not go down, that feeling of just before it comes out, all day, all night, no matter how many times, no matter how much you’ve destroyed the skin on your penis”.

The Daily Times reported that The Tampa Bay Times are responsible for bringing Molannen’s story into the public eye and that she thanked them for all their help in exposing her story via email. She ended her life the day after it was published.

The condition was first brought to the surface in 2001 by American psychologist Sandra Leiblum and makes “women feel sexually but not psychologically stimulated”.

Tell us what you think about this rare and unusual condition.
-AskDrO Staff
Picture source: http://www.soulsatisfactionforwomen.com/cms/wp-content/uploads/2011/11/