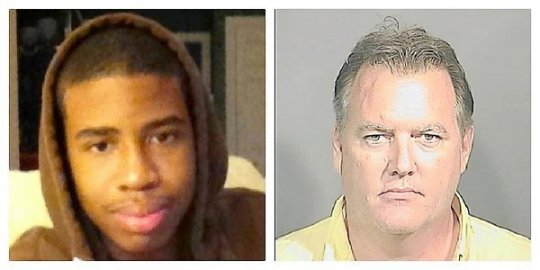 Jordan Russell Davis didn’t get the national attention that Trayvon Martin did even though their cases were very similar to each other. The most obvious similarity being that they were both Black teen boys shot to death by White men who claimed self-defense. However, this time the shooter allegedly felt threatened by loud music instead of a suspicious character in a neighborhood.

As reported by Atlanta Black Star:

Michael Dunn, a white man who was in town with his girlfriend to attend his son’s wedding, was in his own car when he pulled up alongside the SUV in which the teenagers were sitting and asked them to turn their music down. After an exchange of words, he fired between eight and nine shots at the vehicle, several of which hit Davis to cause his death. http://atlantablackstar.com/2012/11/28/jordan-russell-davis-death-of-another-unarmed-black-teenager/

Like Martin, Davis was also seventeen and his death occurred in Florida under their “Stand Your Ground” law where both teens were unarmed when their attackers felt they were being  threatened. Atlanta Black Star reported that Dunn fled the scene after the shooting and “is being held without bail after being charged with murder and attempted murder. His lawyer said that her client acted “responsibly and in self-defense” “. Davis was brought back to his hometown of Marietta, Georgia to be buried.

It’s quite eery how both cases parallel. They’re almost too similar. With that being said, could the “Stand Your Ground” law be a way for citizens to take matters into their own hands when they’re faced with something that doesn’t agree with them? Pulling a gun on someone for loud music is hardly justifiable especially when you start the confrontation as in Martin’s case.  Atlanta Black Star reported that Florida is one of 24 states that has the law in effect. After the attention of the Trayvon Martin case and the similarity between his and Davis’, is it a law that should be abolished? Especially since in states like Florida, “once self-defense is invoked, the burden is on the prosecution to disprove the claim”. Meaning, that guilty individuals could walk away if their actions are deemed appropriate for the cause self-defense even though they were potentially in no real danger at all.