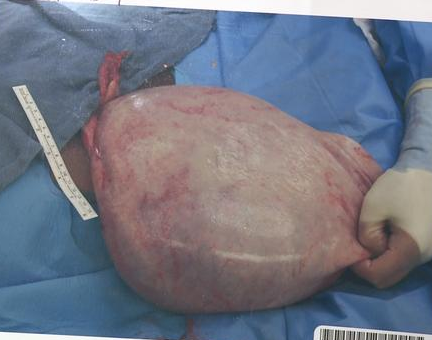 How would you feel if your child’s school called you in to discuss pregnancy rumors about your 11 year old daughter? Shock would be understandable, then possible denial because you know it couldn’t possibly be your pre-teen daughter who’s having sex. It happens everyday but in this case it wasn’t so black and white. An 11 year old Jacksonville, Florida  girl’s assumed pregnant belly turned out to be a 20 pound tumor.

According to Black Media Scoop, Janet Roberts daughter was the subject of harsh pregnancy rumors and bullying at her school( bullying or harassing is illegal in Florida). Roberts discovered the news when her daughter’s school called her into a meeting. Being a mom, Roberts tried to deny the rumors even though she noticed that her daughter’s stomach was extended.

“I tested her every two weeks and it was negative,” she said, “then I said ‘if you’re not pregnant something is going on here,” said Roberts.

According to Roberts, her daughter looked five months pregnant. A doctor determined that the child had a growing tumor and was rushed into surgery.

“Once we got there, there wasn’t no going back home,” she said. Her daughter was rushed to surgery at Wolfson Children’s Hospital and the tumor removed. It was big.

“It was 19 pounds, well 20 pounds in size,” said Roberts, “but because of her size, they had to drain two liter bottle of it before they could pull it out of her.” It was benign, but there is concern that it will return, and Roberts said her daughter now needs counseling. http://www.blackmediascoop.com/2012/12/17/she-looked-pregnant-docs-remove-20-pound-tumor-from-11-year-old/

Assumptions can be dangerous because they are not always right and in this case they weren’t even in the same ball park. It turned out that the rumors and bullying of a possible baby made for a potentially life-threatening situation for a young unknowing girl.

The child is currently recovering from the mental and physical affects of her situation.