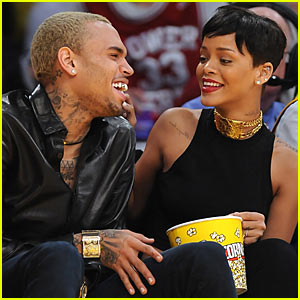 It’s been four years since the infamous photos of a battered Rihanna surfaced from she and Chris Brown’s domestic feud the night of the 2009 Grammys. Some of the public wasn’t and still isn’t very forgiving of the “Nobody’s Business” singer’s actions but it appears that Rihanna has a “all is forgiven” attitude since she and Chris have been intimately photographed as well as seen together numerous times in public. All of which point to a re-kindled relationship.

The press has reported some back and forth action between Chris and Rihanna in addition to the awkward love triangle between them and Brown’s ex-girlfriend Karruche Tran. See Rihanna officially Give Chris the Boot and Will Chris Brown and Rihanna Ever Say Goodbye? .

Now Chris is allegedly ready to tell the world that RiRi is his official girl. According to Independent Woman, Chris is “apparently pulling for an onstage reunion with Rihanna” for the 55th Annual Grammy Awards in L.A. next month.

“Chris wants to perform with Rihanna at the Grammys to show the whole world they are back together,” a source told Radar Online.

“Chris doesn’t care what the haters say, and wants to give the viewers an over the top performance with Rihanna”.

However, Independent Woman reported that although the performance could potentially bring outstanding ratings, the executives in charge of the Grammys have not given the “go-ahead” to Chris because they fear it will upset audiences given the history.

The twosome are not being shy about being seen together nor do they seem to care. Rihanna has openly said that she still loves Chris in her interview with Oprah the Next Chapter so this is probably what’s she’s wanted the whole time. But is healthy to do so?

After four years, the two seem to have picked up where they left off. Their relationship didn’t really get to run it’s natural course and it was pretty obvious that Rihanna didn’t really want to break up with Brown back then. She most likely felt obligated to do so because the public was in such an uproar about it. It really is their business if they want to resume their relationship, but if the issues that were present in the past were not properly dealt with, then it’s likely that we will see something of this nature happen again.

What do you think about Chris Brown wanting to make up for he and Rihanna’s missed Grammy duet four years ago?