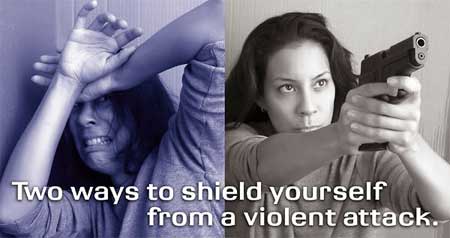 Unlike the murders of unarmed teens Trayvon Martin and Jordan Russell Davis, Melinda Herman, of Loganville, Georgia, used her right to execute “Stand Your Ground” against an intruder who could have very well harmed her and her family. According to Yahoo! News,  A male intruder broke into her home and she opened fire when he closed in on the crawl space she and her children were hiding in.

The difference between George Zimmerman and Micheal Dunn (Trayvon and Jordan’s killers) is that Herman’s need to defend her and her family appears to be more obvious and necessary. A man identified as fellow Georgia resident Paul Slater, broke into the Herman home and proceeded to invade it until he came face to face with his shooter. Zimmerman pursued an unarmed Martin and Dunn initiated open fire from his vehicle. According to Yahoo!, Herman retrieved her weapon from a safe and was on the phone with her husband, Donnie Herman, until she started shooting, as he coached her on the lessons he had given her about using the gun. “Some firearms enthusiasts are touting her as a textbook example of responsible gun ownership”.

“He’s in the bedroom? Shh, shh, relax. Just remember everything that I showed you, everything that I taught you, all right?” Donnie Herman told his wife, explaining later to the dispatcher that he had recently taken her to a gun range.

Melinda Herman told police she started shooting the man when he opened the door to the crawl space. The man pleaded with her to stop, but she kept firing until she had emptied her rounds, she told police. She then fled to a neighbor’s house with her children.

Herman’s cause for “standing her ground” is justifiable. A stranger broke into her home while she was alone with her two young children, she hid away to avoid being seen or harmed and only opened fire when the intruder proceeded to move closer and discover where she was hiding. She was clearly threatened and did not want her or her family to become victims.

Yahoo! reported that Slater has not been arrested but his survival doesn’t look promising.

Melinda Herman was a responsible gun holder and used it appropriately and only out of necessity. Yahoo! regarded she is seen as a hero by locals and online supporters for her courageous actions and willingness to defend herself and her family.

What are your thoughts when it comes to the “Stand Your Ground” law in cases like this? Should Herman be placed in the same boat as Zimmerman and Dunn? Give us your opinion.