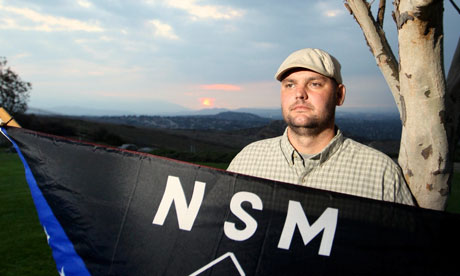 When it comes to children, it’s important to keep in mind how easily influenced they can be. Parents are responsible for physically caring for their kids in addition to molding their minds. So the actions of parents or adults in general often determine how children perceive or understand the world. If a parent believes and enforces a healthy life-style that includes daily exercise and minimal junk food , then the child of that parent will most likely follow in those footsteps as they get older. It’s the same way for negative aspects as well. If a parent believes in the ideology of inequality or violence and enforces it, then it shouldn’t be surprising if the child takes on the same perspective.

According to the Atlanta Journal-Constitution, a then 10 year old unidentified California minor , was charged with second degree murder for killing his white supremacist father, 32-year-old Jeff Hall, two years ago after he allegedly “hit, kicked and yelled at his son for being too loud or getting in the way”.

As reported by the AJC:

Hall, who said he believed in a white breakaway nation, ran for a seat on the local water board in 2010 in a move that disturbed many residents in the recession-battered suburbs southeast of Los Angeles. The day before his death, he held a meeting of the neo-Nazi group at his home.

Defense attorney Matthew Hardy said because of the abuse his client learned it was acceptable to kill people who were a threat. The boy thought if he shot his dad, the violence would end, Hardy said.

The AJC also reported that prosecutors are convinced that Hall’s beliefs had nothing to do with his son murdering him but Defense Attorney Hall does have a point about the child applying the violence he’s been taught throughout his life to eliminate a threat. The child is now in the hands of the state awaiting placement but his legal team hopes he is sent to a private facility to receive treatment and schooling instead of a juvenile center.

Even though the judge in the child’s case ruled that he knowingly killed his dad because  of the fact that the “boy lay in bed, waited for the right moment and shot his dad at point-blank range with the “bad gun” — a .357 Magnum — while he slept on a sofa in the family home”, it’s still arguable that the boy only exercised the lessons his father taught him about controlling situations or people in this case. In short, the child should be punished but his background should also be considered when his case is being reviewed.