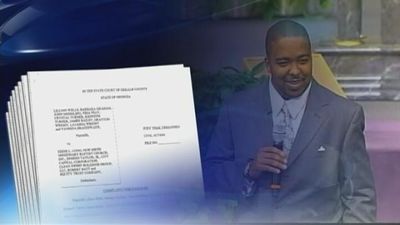 As more and more bad deeds come to the light, it seems to be getting harder and harder to find credible leaders in the faith that are staying on the straight and narrow. We’re human, so it’s expected for us to slip up from time to time, but it shouldn’t be an ongoing struggle, especially for a spiritual leader. According to Atlanta Daily World, Bishop Eddie Long, senior pastor of New Birth Missionary Baptist Church, is being sued yet again by former church members.

Atlanta Daily World reported that 12 of  Long’s former members lost over a $1 million after he encouraged them to invest in his ‘friends’ company which turned out to be a Ponzi scheme (A “Ponzi scheme is defined as fraudulent investing scam promising high rates of return with little risk to investors. The Ponzi scheme generates returns for older investors by acquiring new investors”). It’s reported by the AJC, that Long’s assistant was forewarned that his friend, “Ephren W. Taylor was running a $3 million capital deficit” . Taylor already has a second Ponzi Scheme charge from 2012 against him as well.

According to The Atlanta Journal-Constitution,”If Bishop Eddie Long hadn’t endorsed this they wouldn’t have invested,”  said Jason Doss, attorney for the former members.

As many of you know, this is not the first time Long has been sued. With that being said, do you think Atlanta is becoming frustrated with him and his recent run-ins with the law?

The Atlanta Daily World reported that New Birth is cooperating with authorities and are hopeful that Taylor will return the money.

In the Christian faith, when we do something wrong or offensive, we repent (acknowledge that we’re Godly sorry) and turn away from the wrong doing. The goal of repenting is to never commit that specific act again and learn a lesson from it.

Bishop Long has been under a lot of scrutiny over the past couple years from previous suits, taking a hiatus from his church, to same sex intercourse allegations and we’d like to believe that he’s done all he can to make right on those situations. Long has been pastoring New Birth since 1987, so he has quite a bit of stake in the community. So, knowing the details that are associated with the claims against him, how can the community help bring credibility to back to his name?  Yes, he’s been in hot water lately with the law, and many have forsaken his ministry, but what about all the good work he did before the legal trouble? How can his members and those with his best interest at heart collaborate to help him get back on top?

He may have prestige around the world but he’s still a brother in Christ, and as a fellow brother of the faith, we want to see him get back on his feet. While many may still be standing firm in support of Bishop Long, I can see how many may be discouraged by his current state. However, whether he is guilty of all that’s been set before him or not, it’s not our job to condemn him, only to exude love towards him.