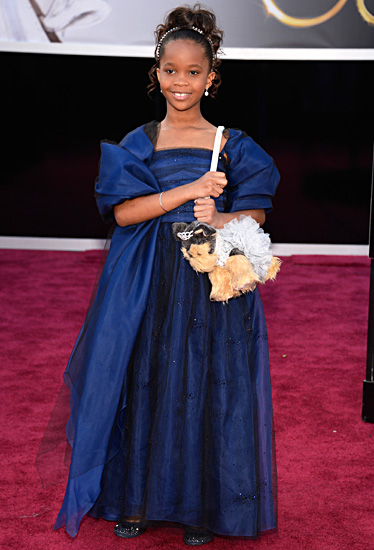 I’m sure that many of you probably watched the premiere of the 2013 Oscars last night. It was a night of  beautiful gowns, A-List stars and celebration to commemorate the year’s best in film. One of those hot celebrities right now is nine year old, Quvenzhane Wallis, who is the youngest person nominated in her category in Oscar history, for a lead role in a feature film (sadly she did not take home a golden statue). Wallis was only five when she made her debut in “Beasts of the Southern Wild”, but her performance has gained her Oscar worthy attention. Such a big honor may not have been fully realized a such a young age, but that doesn’t mean she deserves it any less. Nor does it mean that someone should ruin or overshadow it for her, by calling her a c***.

According to Black Media Scoop, internet satire newspaper The Onion, used social media medium Twitter, to deliver a heavy blow to young Wallis. The Onion tweeted “Everyone else seems afraid to say it, but that Quvenzhane Wallis is kind of a cunt, right”?

BMS reported that Twitter exploded with enraged followers, including other celebrities, over the inappropriate comment saying that many created backlash and requested for the tweet to be deleted. BMS reported that actor and neighbor to Wallis, Wendell Pierce, was the most disturbed by the Onion’s decision. Pierce accused “The Onion on Twitter for verbally abusing young Quvenzhane when it was one of the most exciting nights of her young life”. Hip Hop Wired reported that an apology was issued to Wallis and the Oscar organization for the comment by Onion CEO, Steve Hannah, but like any other wrong doing, the damage has already been done.

Wow. What is that to say about a defenseless young child that probably doesn’t even know what it means. Wallis appeared to be very confident and excited in her red carpet interview with Pierce Morgan. I’ve watched her in a couple interviews and for a nine year old, she seems to be very put together and aware that she delivered a great performance. She should be able to enjoy the fruits of her labor like all the other nominees.

What do you think about little Quvenzhane Wallis being called out her name?