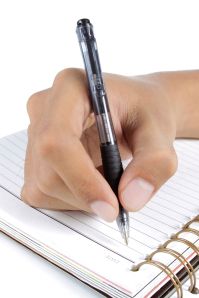 We all have our ways of calming down. Some may punch a pillow others may count to ten. Some may go for a drive, while others choose to go for a walk. Do whatever it takes to distinguish your fiery feelings because if left to burn they could explode into a much bigger problem than you anticipated.

In marriages, figuring out how to properly get your feelings out can be a little tricky at times. You don’t want to lash out and say the wrong the thing because it could severely hurt the person you love. You don’t necessarily want to be too passive about what bothering you either because it may never get resolved and you certainly don’t want to have your frustrations build up to the point where you release them with physical violence against your partner. When it comes to resolving problems in a marriage  and long-term happiness, a new study suggests that writing “three seven-minute writing exercises over a one-year period could drastically improve your bond” with your husband or wife.

According Yahoo Shine, a study in a upcoming journal issue of Psychological Science, husbands and wives can be happier in their marriage if they write their feelings out to each other. Shine reported that the study was conducted over a two year span and involved 120 couples from their 20s to 70s that had been married for an average of 11 years.

During  the first year, the couples were asked to sit down every four months and write about their biggest recent conflict such as tiffs about cleaning or sex-related gripes. For the second year, the researchers switched things up: They had one group of couples continue recording their conflicts and a second group write them from the perspective of a third party who wanted the best for them, such as a mutual friend. That way, the couples couldn’t write things like, “It made me so angry when he was late” but rather “Chris was two hours late coming home.”

The results proved that physically writing out your feelings and problems was beneficial to both parties. “The couples who wrote from a neutral perspective felt less angry toward their partners, experienced more sexual attraction for each other, and their happiness levels stabilized rather than declined”.

Although this type of study is new, using writing as a way to vent is not. However, many people only write for themselves and not the other person. Like when you write an angry letter or email but never send it. You just need to get your feelings out. This study encourages partners to examine their issues from another perspective that truly wants them to succeed as a couple without being overly harsh or too submissive.

Has your marriage been on the rocks lately? Try this exercise and see how it works for you.