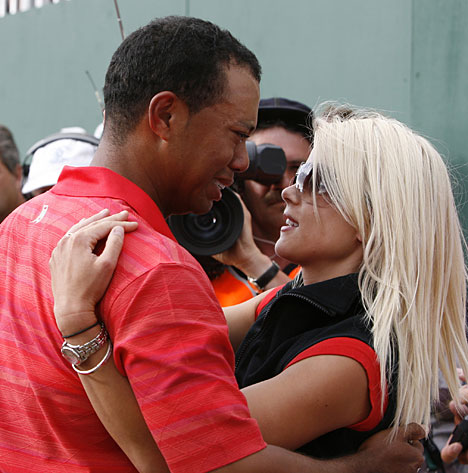 A few years ago, well-accomplished pro-golfer Tiger Woods made national headlines for his scandalous affairs when a parade of women came forward saying they had sexual relations with Woods. Come to find out, they were all true. After everything blew up in his face, his humiliated wife Elin Nordegren divorced him and got a hefty multimillion dollar sum for the trouble. Now, it seems that Elin may have turned the other cheek. According to the National Inquirer, Elin has taken Tiger back!

The couple and their children were recently spotted together at a sporting event in Florida and then left together in Elin’s car. Seems innocent enough as they are both associated with sports world and must see each from time to time since they share two children together. But according to the Inquirer, that signaled more than just a cordial car ride. The Inquirer reports that the couples four year old daughter Sam, begged her mom to let Tiger come back home, saying, ‘Please, Mommy, marry Daddy again! I want him home with us all the time!’ According to them, Elin has often spent the night at her ex’s home and wants to ease back into the relationship.

The Inquirer also reported that there’s a catch to this reconciliation.  Tiger reportedly “offered to sign a $200 million no-cheating prenuptial agreement if Elin would marry him again” but Elin made the “demand that he cough up $350 million – more than half of his $600 million fortune – in a no-cheat prenup before she’d even consider saying “I do” again”.

Tiger was busted for sleeping with at least nine women outside his marriage. That’s a lot to just get over in just a few short years. Is it really the best thing to get back with a cheater for the kids sake? The couple were married and had known each other for a while before then, so I’m sure they miss each other and what they had together. It’s ultimately the one that’s been cheated on decision to get back with an unfaithful spouse, but is worth it in the end? Even with the multimillion dollar cheating insurance?

Tell us your thoughts about Tiger and Elin possibly going for round two.