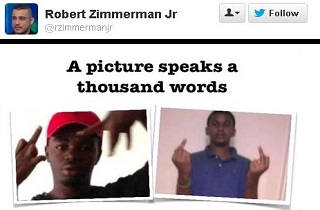 Last month the world reminisced about Trayvon Martin, on the one year anniversary since his death. The world was in shock last year when the teen was killed by George Zimmerman, after he claimed he reacted out of self-defense. Zimmerman is awaiting his trial for murder in June. While most of the evidence points to Zimmerman as being guilty, he does have supporters who claim he was in the clear and defend his actions by saying Trayvon was the instigator. One of those people, is George Zimmerman’s brother, Robert Zimmerman Jr.

According to Black Media Scoop, R. Zimmerman’s main argument was to compare Martin to De’Marquise Elkins, a black Georgia teen who shot a baby in a stroller during a robbery last week. Zimmerman used the social medium Twitter, to infer that black teens are dangerous by posting side by side photos of Martin and Elkins with their middle fingers up and the caption “A picture speaks a thousand words, any questions?” There are many issues with this statement but for one, two teens holding up their middle fingers in a picture doesn’t necessarily mean they’re dangerous. Posing with middle fingers up is a popular choice among youth in general, not just black youth. Personally, I feel as though it’s more of a peer pressure issue by trying to be something you’re not, but it’s certainly not the exclusive sign of a killer.

According to BMS, Zimmerman also made sent these tweets to the public. As reported by Black Media Scoop:

Teen to West: “Do you want me to shoot your baby?” #TrayvonMartin to #GeorgeZimmerman: You’re gonna die tonight Motherf**ker

These cases are hardly similar besides the fact that they involve two black teens. First, BMS reports that Martin was never accused of a crime while Elkins is being charged with murder. Second, Martin is the one who ended up dieing so maybe the roles in that last tweet should have been reversed. Third, Martin’s behavior didn’t get aggressive until the struggle for his life. He was walking in a neighborhood with a bag of Skittles and Arizona Tea and was accused of being a suspicious character, while Elkins was robbing a bank, possessed a weapon and shot someone.
BMS brings up the point that the comparison should have been between Elkins and Zimmerman, not Elkins and Martin. Zimmerman and Elkins both killed someone with guns and are waiting to go on trial for the acts they committed. Not to mention that both were more aggressive than their victims with Elkins shooting a baby and Zimmerman stalking Martin from inside his home and then pursuing  him.
Zimmerman’s statements were blatantly racist and ignorant. To take two Black teens and try to force a comparison just because of their pose and skin color is not a decent enough argument to conclude that Black teens are “risky”. What if someone tweeted a post that read hiring Hispanics is “risky” because they may be here illegally? Think about it.
Dr. O
Picture source: http://www.mediaite.com/online/george-zimmermans-brother-pimping-comparison-of-trayvon-martin-and-alleged-georgia-baby-killer/

slaying of 13-month-old Antonio Santiago, including one that might be particularly unhelpful. In one, Zimmerman promotes his brother’s version of events: