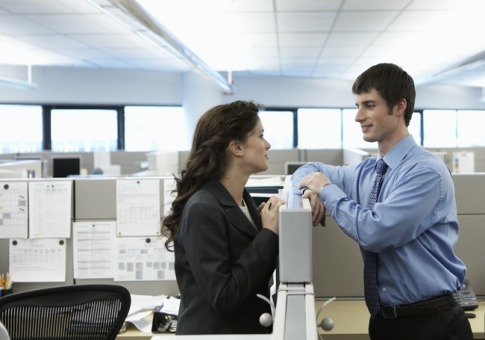 The rules of attraction vary from person to person. They opposites attract, but sometimes people like going for what they know, and what’s familiar. A quiet, soft spoken female may be drawn to a rash, risk-taking male, while on the other hand, two environmentalists that are both just as passionate as the other in everything they do and are always on the go fighting for a cause may fall head over hill for each other. You never know. While the rules of attraction may very, people still need to gain admission to the game by knowing if it’s a go to play by their potential partner’s reactions towards them. “He stares at me a lot while at work. Does that mean he’s into me or does he just thinks I’m weird?” “She seems to be very intimidated by me whenever I approach her, but I’ve never been anything but nice to her. Does she like me or do people see me as some huge monster?” Yes, he/she is just that into you.

According to Match on Yahoo!, there are several ways to tell if someone is interested in you and they’re all done through body language. Although never spoken, body language can reveal an onslaught of feelings. Rolled eyes could mean you’re annoyed with someone, batting eyelashes are a signal of flirtation and rubbing your leg up against someone most likely means you’re trying to initiate some action. Match reports that “Lifted Shoulders”, “Pigeon Toes”, “The Palm Reveal”, “The Forehead Bow”, and “Mirroring Your Dates Movements” , are all physical signs of attraction.

According to Match, “lifted shoulders” indicate that a person’s “cute response” has been activated. This motion is “a bashful, almost childlike behavior that reveals a softer, more compliant side of an individual”. It’s a “emotional, involuntary muscular response” to whoever gives you those butterflies in your stomach. “Pigeon toes” may not bring about the best images when first brought up in your mind, but nevertheless, they’re still a sign of attraction. Match reports that “an inward rotation of the feet suggests definite interest of a romantic nature”. Think about that guy who always talks to you while you’re getting your morning cup of Joe when you enter the office. He’s been chumming up small talk with you every day for the past two weeks. When you get to the office today, check and see if he’s standing funny. If so, the two of you may be able to evolve your conversation past “great weather we’re having” and “how’s the coffee”.

Here is excerpt of “The Palm Reveal” means. As reported by Match on Yahoo! :

The palm reveal
As you talk to your new love interest, watch his or her hands. Specifically, take note of whether the palms are facing upward, especially while gesturing or resting on a table across from you. The brain is programmed to perceive vulnerability and openness in this specific motion, you see. In courtship, these gestures are psychologically friendlier than palm-down cues are meant to be. (Indeed, think about the downward hand motions that a grade-school teacher uses when trying to calm down rowdy students… it’s not a maneuver that communicates warmth and connection towards others, is it?)

Take a moment to consider that person that you think may be interested in more than just a friendship. Don’t jump all in and marry withing the next three months, but do take the time to consider that it could be an option one day.