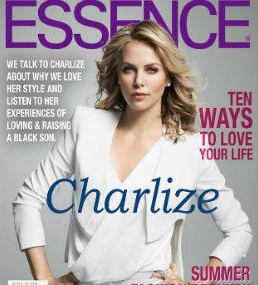 Will Smith’s other half, Jada Pinkett-Smith seems to be keen on using Facebook as a platform to bare her soul. She often poses open ended questions or topics like defending young celebrities or why she “lets” her preteen daughter behave the way she does. Her most recent post examines how women are portrayed in the media, magazines to be specific. Pinkett makes the point that White women are the popular choice for mainstream magazines covers such as Cosmopolitan and Vouge  and because of that, many people inquire about more women of color gracing the covers of magazines too. Then she says, since women of color promote that they be on the same covers as White women, should Black women offer the same opportunity to White women on covers such as Essence or Ebony.

…With love and respect to all parties involved, my question is this … if we ask our white sisters, who tend to be the guardians of the covers of mainstream magazines, to consider women of color to grace these covers, should we not offer the same consideration to white women to grace our covers? Should women extend their power to other women simply because they are women? To my women of color, I am clear we must have something of our own, but is it possible to share in the spirit in which we ask our white sisters to share with us? I don’t know the answer and would love to hear your thoughts.

I’m sort of on the fence with Mrs. Smith’s question. Technically, it makes since to offer something back that you require of someone else but the whole reason the Black community branched off to produce their own things was because they were not getting the exposure they needed and deserved in the main stream population. Hence the emergence of HBCUs, Black History Month, and other exclusive Black and minority organizations for professionals. I think her main goal is to consider women as a whole and incorporating all of their strengths  to better women as a whole. To be more specific to her question, if she wants equal exposure to all women in magazines, maybe she should consider creating or partnering with a company to produce a magazine exclusively for that. A publication dedicated to exposing and featuring the differences in women globally from all nationalities.

Overall, I don’t see anything morally wrong with featuring White women on predominately Black publications or vice versa and I think Mrs. Smith makes a valid point with her statement but I also still think there  still needs to be magazines and other publications or efforts exclusive to a certain minority in addition to mainstream material.

What do you think? Would be be bothered if you started seeing an increased number of White stars on the cover of Essence? or would you see it as just another magazine cover?