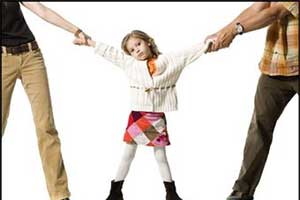 Divorce is lose, lose situation for everyone involved. Yes, you my be glad to rid yourself of a cheating spouse or just plain despicable mate in general, but you’ll still lose something once you become officially not committed to each other anymore. This loss could come in the form of finances, property, in-laws that you actually liked, friend to talk to or that one constant element in your life formerly known as a husband/wife. While divorce may be the right desiccation for you, you also have to keep in mind how it will affect other people in your life such as your kids. Your ex-husband may have been a mediocre spouse but he also could have been an extraordinary father and your child(ren) will be effected in some way by the new family dynamic of him or you not being in the same place as you were before the divorce.

Many times, kids think they’re to blame when their parents separate. While some kids my cause more trouble than others, it’s never the fault of a child that their parents didn’t stay together because the marriage and marital problems were between the mom and dad, not the mom, dad and kids. Some children may say they’re fine after a divorce and they may show little change in their behavior but others can experience more drastic changes in life. Yahoo News reports nine negative effects associated with kids whose parents have divorced.

One side effect of divorce  is the increased use of the drug Ritalin. Yahoo News reports that “a sociologist at the University of Alberta” suggests that “stress from the divorce could have altered the children’s mental health, and caused a dependence on Ritalin”. Yahoo News reported that data from 5,000 kids who were not on the drug and were living with both parents. Unfortunately, over the six years of data collected, 13.2 of those same kids had suffered a divorce in their family and 6.6 percent used Ritalin while kids who used the drug and still had both parents in their home was only at 3.3 percent.

Another side effect of divorce, is being easily accessible to germs and sickness. According to Yahoo! News, kids who have divorced parents have “a 35 percent risk of developing health problems, compared with a 26 percent risk among all children”.  Back in 1990, Jane Mauldon of the University of California at Berkeley, believed that kids who have gone through a divorce are often sick because of the increased amount of stress in their family. It makes sense when you think about it. Imagine a seven year old child that has been living with his married parents all his life. He’s happy, he gets all gold stars in class, he has lots of friends and is in perfect health every time he has a check-up. Then one day, a few weeks after his eighth birthday, his parents tell him they’re getting a divorce. At the time, he doesn’t completely understand what that means, but he will soon find out as his father moves out, he sees his mother crying at night and he has to be dropped off to a different parent every other week. Soon you start noticing mood changes in the child, he’s only gotten two gold stars in the last three months and he keeps getting colds every month. Now think back to what triggered his sudden change in behavior, the divorce.

Here’s another example of what could happen to a child after his parents divorce. As reported by Yahoo! News:

A propensity for crime
In 2009, the law firm Mishcon de Reya polled 2,000 people who had experienced divorce as a child in the preceding 20 years. And the results did not paint a positive picture of their experiences. The subjects reported witnessing aggression (42 percent), were forced to comfort an upset parent (49 percent), and had to lie for one or the other (24 percent). The outcome was one in 10 turned to crime, and 8 percent considered suicide.

Are you currently going through or thinking about divorce? Do you have children? This post is not convince you to change your mind about divorcing your partner but it is meant to help you consider the outcome of your decision and to be prepared to deal with the consequences.