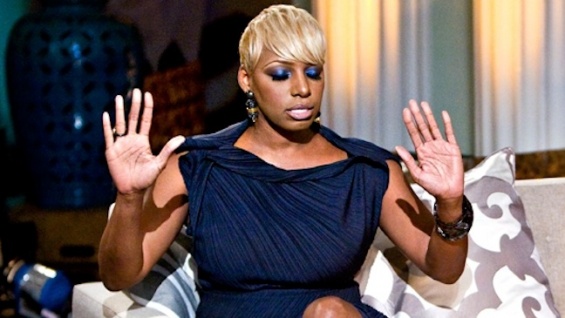 It’s safe to say that NeNe Leaks has moved on up to the East side since the Atlanta edition of Real Housewives debuted. She’s long gone from her days of primarily fulfilling wife and motherly duties and aspiring to be an actress. She’s one of the founding members of the series that is still being featured and is arguably the most popular character. She’s had several TV spots, has earned her own wages and is now being featured on a prime time show. While NeNe’s career is on the fast track to more Hollywood fame, she let her audience know last night that she “still knows how to get hood” when the time calls for it.

For those of you that missed it, here’s a quick recap of what you missed. The entire cast went to visit NeNe in California. The show opened with NeNe talking to Greg about her plans for the girls which included a dinner party with all the stops (catering, waiters, bar, and prestigious guests). Cynthia calls NeNe to basically confirm their time of arrival and get the run-down from from her. Fast forward a little bit, their limo gets stuck, NeNe has to rescue them and then shows them to the guest house they’ll be staying at. Shortly after that, she tells them about the 9:00PM dinner that she’s made them the guest of honor for. Everyone said they were tired and wanted to rest a bit but all agreed to come to dinner. The problem? They didn’t arrive until almost midnight for a 9:00PM dinner party. So Ms. NeNe promptly told them to leave her Hollywood Hills driveway(she didn’t let them in the house) turn around and go back home. In the end, all seemed to have ended well though (until Kenya started talking about the whole Walter situation) because everyone was on time the next day, expect for NeNe, for the next days activities.

During the show, NeNe and some other cast mates made their notorious late tendencies known to the viewers so the rest of the cast mates felt like that justified them showing up at nearly mid-night. Let’s look at both sides here. In defense of  NeNe, this was her home that she opened up to others and made her cast mates the guests of honor. The trip to California was for the housewives to visit NeNe  and see the new life she and her family were living outside Atlanta. She had paid for everything for the girls, including their living arrangements, set up a special dinner party and invited a small group of other guests for them to meet. On the other hand, many times when all the ladies are out together, it’s for a public, social function that probably started after 9PM so it doesn’t really matter if they show up an hour or two late. Plus, everyone is aware including NeNe, that the group is always late to everything.

So who was wrong? Was NeNe acting uppity because of her new fame and fortune when the girls arrived in their usual style or were the Atlanta crew in the wrong for showing up to a dinner specially planned for them three hours late? Was it disrespectful of her co-workers/friends to not consider her time and effort or should NeNe have expected their actions like all the other times?

B) Do the right thing by not letting them in