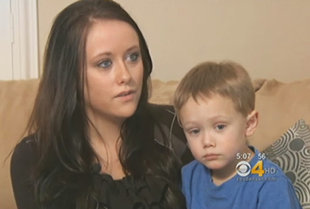 When you have young children, it’s a requirement in the parenting handbook that you develop a keen sense of pre-caution. Seen and unseen dangers to you, will appear as fun and exciting to a small child, so you have to take the appropriate steps to shield them from the things that could harm them. Many parents know about plugging up wall sockets, blocking off stairs, and hiding chemicals such as cleaning products. But what about the less obvious dangers like an unlocked door, or furniture too close to a window? Well, Jessica Hayes, of Aurora, Colorado, recently discovered this enlightenment when her four year old son, climbed on top of the couch she moved in order to clean and fell out a window but (don’t feel overcome with remorse just yet), he landed on his feet!

According to Yahoo! Shine, Hayes and her mother were spring cleaning her third story apartment when the unthinkable incident took place. Hayes was shampooing her carpet while her mother cleaned out her fridge. During this process, Hayes had moved her sofa up against a window. Her son, Dylan climbed on top to talk to a neighbor below, leaned against the screen covering, (the grandmother saw Dylan fall) and fell to the ground(30 plus feet) below where he landed on his feet seemingly unharmed.

Apparently, the child did two somersaults in the air as if he were doing a trick and landed on his feet with barely a scratch on him.

“I heard a crash and the next thing I know I just saw a blur,” neighbor Pat Roush told KCNC. “It was just red and blue”—the colors of the Superman T-shirt Dylan was wearing.

Yahoo! Shine reported that Dylan was only in the hospital for 20 hours wearing a neck brace as a pre-caution. They also said that boy wasn’t even traumatized, unlike his mother who has since moved out the third story apartment and is looking for one on the ground floor.

Too often these type of stories end in tragedy. Dylan’s mother was probably expecting the worse when she arrived downstairs but instead found her young son standing up looking at her unharmed as if nothing had happened after falling three stories. Parents of young children, take this time to consider the safety measures you have in place. Are they enough? Are they reliable? Try to keep in mind that kids are curious and when you somehow interrupt their routine or the the regular flow of the home, they may take it upon themselves to explore the new opportunity available whether they’re supposed to or not.

What do think about this real-life Superman tyke?