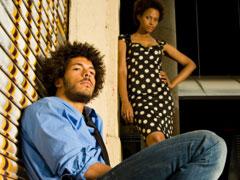 I would like to know if you could speak some on dating passive aggressive men? I do believe that my man is passive aggressive and that he silently retaliates against me for things that he’s mad about. But I always have to guess that he’s mad and what he’s mad about because he always says that he’s fine. The relationship is driving me crazy but at the same time I feel really guilty for always trying to break up with him. Plus he withholds affection and then when that goes on for a while, he blames it on me. By the time he blames me, we’ve been through so many other things that I get kind of confused about whether or not something is really my fault.

In a nutshell, I’m very unhappy Dr. O, but I just can’t bring myself to leave him. Clearly I still care about him but I’m not sure if he cares enough for me anymore or how I’m feeling even though I’m considering his feelings all the time by staying. What should I do?

From what you told me in the above paragraph, it sounds like you and your partner are in a commensalism relationship. Commensalism relationships are when one partner benefits from the other in many aspects but the other partner doesn’t end up gaining any emotional, mental or sexual satisfaction within the relationships and the partner with the short end of the stick usually ends the relationship. As far as passive aggressiveness goes, it sounds like that may apply to the both of you since you stated that you have to guess what’s wrong with him instead of just directly asking (TALKING) to him about what’s wrong.  If you and your partner don’t communicate, he probably is internalizing some stuff and its coming out else where, like initiating your pet peeves or purposefully being unaffectionate. Ultimately, the two of you are not married so you shouldn’t feel obligated to stay especially if you’re unhappy and suspect that your partner doesn’t even care about you anymore. So if you’re as unhappy as you say, I would suggest that you end the relationship. Put on your stuff skin so you can withstand him begging you to stay and move on with your life. It sounds like neither one of you really wants to be together anyway, so why waste time being together when you could both be out finding the people that want you as much as you want them?