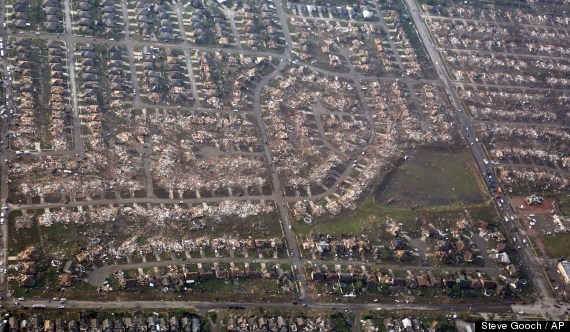 These are the last days indeed! At least 91 people have been confirmed dead as a result of the fatal tornado that wept through Oklahoma City yesterday. According to The New York Times, 20 children perished and at least 145 were treated at hospitals with 70 of them being children.

Do you guys remember “Twister” starring Helen Hunt that was made in the mid-1990s? Can you imagine seeing a gust of wind twirling at dangerous speeds hurtling towards you as it spins everything in its path to the point of nonrecognition?  Cows flying, cars on top of roofs and your home flattened like a giant shoe just squashed it like a bug! The NY Times reported that the tornado was labeled as a category 4 and is the second huge, deadly natural disaster for the city of Moore, OK. When natural disasters such as this take place, it’s often a tedious task to extend help to everyone when needed such as recusing those trapped in debris or just clearing of roadways. It could take weeks to clean up the area and assess all the damage, which includes finding those that are missing.

Plaza Towers Elementary School in Moore was reduced to a pile of twisted metal and toppled walls. Rescue workers were able to pull several children from the rubble, but on Monday evening crews were still struggling to cut through fallen beams and clear debris amid reports that dozens of students were trapped. At Briarwood Elementary School in Oklahoma City, on the border with Moore, cars were thrown through the facade and the roof was torn off.

While there is nothing that can essentially prevent a natural disaster, there some safety measures that can be followed to help you stay as safe as possible. First, when the tornado sirens go off, don’t ignore them! Yes, some regions like Oklahoma are more prone to violent weather such as tornadoes and the sirens going off may seem like its being done in vain, but it’s better to be safe than sorry. When you hear that “whoo, whoo” seek the proper shelter immediately. Second, if you do happen to live in an area that draws natural disasters, it may be wise for you to invest in some sort of underground shelter and stock pile it with what you’ll need to survive should you have to stay longer than intended. Like when people were building those bomb shelters back in the when the thought we would all be nuked lol. Finally, don’t sit and try to brave the storm. If the experts, local authorities and the COMMANDER IN CHIEF are advising you to leave the premises for YOUR sake, I’d take heed to their advice.

While the death total is currently at 91, NY Times reported that the number is expected to rise.

How many of my readers have ever experienced this type of emergency situation first- hand?