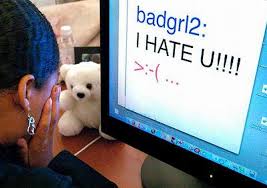 Ya know, I think it’s safe to say that everyone has endured some type of bullying at one point in their lives. My older readers may recall kids getting wedgies, having their gym clothes stolen or being locked in a locker, the oldschool form of  teasing. None of that is considered good or acceptable but it’s what the kids did back then. Making someone feel inferior to make yourself feel superior aka “bullying” as been around for ages. There’s nothing new about intimidation and herd mentality (many people just go along with what everyone is doing to feel or be out of place. When one kid starts teasing another, many times other kids will join in), but there are new ways to carry it out; which brings me to cyber bullying.

A few months ago, a young girl decided to take her life by hanging herself in the bathroom of her home due to jealousy of her new baby sibling. Sadly, another adolescent has chosen to end her life as well. The New York Post reported that 12 year old Gabrielle Molina  from Queens, New York was found hanging from a ceiling fan by a belt in her home. The cause? Cyber bullying. Molina left a suicide note to her family explain her choice to kill herself.  The child’s mother told authorities that her daughter was “depressed over constant online harassment from classmates”.

The thing about cyber bullying is that essentially, you can’t really get away from it because it’s online and by now everyone should know that whatever you post on the internet will live on forever somewhere in the time continuum and it’s quick.  This could be in the form of pictures, videos, audio, comments or essentially anything that’s transferable to the internet instantly accessible to anyone that wants it. It could be teen years down the road and you’ve gotten your corporate job, married the love of your life and have a family. Then out the blue, little David is on the computer playing his spelling game and a old, college  “girls gon wild” picture of you pops up on the screen. Now what? Now imagine how much worse that would be for a young child.

Let’s get a quick understanding of all that cyber bullying consists of for those of you that don’t know.

As reported by Bullying Statistics:

Cyber bullying can take many forms:

We all know how mean and cruel- hearted some kids can be. The kids at her school could have been teasing her from her looks, an embarrassing picture, boys, family life, ethnicity anything. Coming from middle schoolers, the taunts were most likely about trivial things but by her decision, it was clearly too much and happened too often for her  handle.

Bullying Statistics also states that “over 25 percent of adolescents and teens have been bullied repeatedly through their cell phones or the Internet” and over half of them don’t let their parents know about it.

What are your thoughts on this? This 12 year old should not have felt that death was the only release from cyber bullying! What are some ways we can help bring these numbers down among cyber bully victims? Should we petition schools to not allow cell phones on the campus or create stronger internet restrictions while at school? Should parents start monitoring their child’s cell phone  if they’re under 15? Tell me what you think!