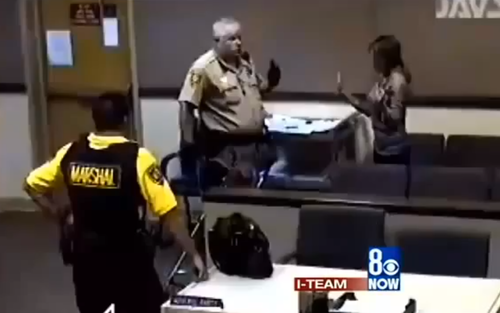 Recently at the Clarke county/Las Vegas family court, a woman claims a court Marshal sexually assaulted her. Monica Contreras went to court with her 2 year old daughter; she was in court only a few minutes in a routine divorce case. Her Husband had filed for temporary restraining order against her during their divorce. He failed to appear in court so the case got dismissed. Yet when Miss Contreras thought she dropped one case she picked up another. Court Marshal Ron fox asked Miss Contreras o go into the waiting room for an unexpected drug search. While the drug search was being conducted Contreras says that Fox touched her buttocks, breast, and ordered her to lift up her shirt! Contreras went back into the court room and pleaded with the judge about what Contreras had done.

The Marshal ordered she be arrested for falsely accusing a court official. However, there is no law that supports what Marshal Fox said. Fox goes on to tell Contreras the only way she can get out of getting arrested if she goes to the stand and recants, but Contreras does the opposite. She says, “You put me in a room, and asked me to lift my shirt up without a witness.” The judge doesn’t listen to her plea instead plays with the child to keep the child’s focus off of what was about to happen. Fox then re-orders another marshal to arrest her. Contreras just kept asking, “For what, sir? Why would I be arrested? Can you please tell me?” she gave her daughter a kiss and was sent to jail. An investigation team came in the I-Team could find now law supporting the arrest. It is also unlikely a sexual assault victim would be placed under arrest by an alleged assaulter.

This is another example of how many cops claim to bring justice but many of them bring issues to society today! Fox maintains his innocence and is suing the Clarke County for wrongful termination. His lawyer claims that he was not wrong because no one in the court room tried to stop him! What do you think? What reason would Contreras have to lie?