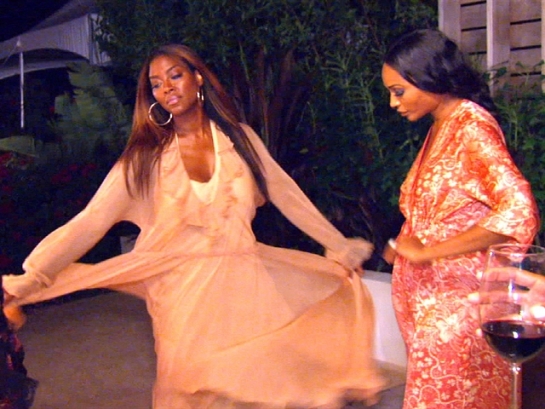 Kenya Moore one of the stars on Real housewives of Atlanta has been evicted. Allegedly she is not as “coined boots” as everyone thinks! After she failed to pay her landlord in full allegedly she got evicted! “I am making this statement as a result of the eviction order and judgment made against my former tenant, Kenya Moore, on June 18, 2013 in the magistrate Court of Fulton County,” Landlord Conya Weems said. “The decision to file this eviction notice regarding Ms. Moore was reached after pursuing every possible amicable way to settle this matter privately. I am grateful that the judicial system has brought finality to this eviction process and I look forward to regaining possession of my home.”

Many may ask, why some celebrities feel like they can get away with things such as this? Look at daughter of the late Whitney Houston, Bobbi Kristina thought she could have as many parties as she wanted to and think that the neighbors were just supposed to let her do it and she not reap any type of consequence,. Furthermore after her being evicted she wrote a note to her neighbors telling them they have been giving them a living hell when she was the one having late night parties. Could it be because they are in the lime light they feel as though certain rules don’t apply to them.  But without rules the world is even more chaotic than it is now, no one is exempt from governmental laws. Kenya was a no-show in court for the complaint hearing.

A counter suit Moore filed against Weems for wrongful eviction, slander, and emotional distress was also dismissed. Allegedly Kenya was facing eviction after falling $848 short on the rent for her six-bedroom, six-bathroom $399 a month Georgia mansion.  So Kenya Moore is definitely gone with the wind until she finds somewhere to live!