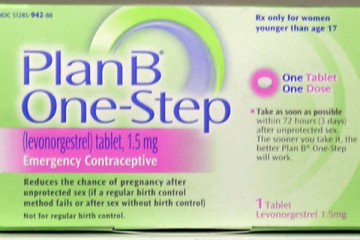 This just in, the emergency contraceptive, Plan B- One Step, will now be made available without restrictions or prescriptions to all ages! This is not a pro/anti life post, but this news will still effect both parties in some way.  According to CNN, the Obama administration had an appeal out for the “morning after pill” to be sold over the counter but have since dropped this claim.

CNN reports that there is a slight change in the offering of the drug saying that only a one pill, instead of a two pill version will be available to all female minors since there is not enough information out yet on how two pills will affect adolescents. Prior to this, females had to be at least 17 years of age to receive the pill. For those of you wondering how the pill works, read the excerpt below.

The key ingredient in Plan B is the synthetic hormone levonorgestrel, which can prevent fertilization or prevent a fertilized egg from embedding in the uterus. Emergency contraceptives are intended for use within 72 hours after sex but are most effective if taken within 24 hours.

CNN reported that the FDA have asked the makers of the pill to request permission to sell the drug with these new amendments and then once it’s submitted, the changes will be approved “without delay”.

So what does that mean for my readers and others who might be wondering about the news? Well, now you daughters, nieces, god-daughters and sisters will be able to cover their tracks and get emergency contraception without your permission and probably knowledge.

I know this is a big step for feminists and women’s rights but for those of you who are not apart of those groups, how do you feel about this news? Was it a mistake to take the limitations off of the little control some parents have on sexual activity among their kids or was it a wise choice to let females make the decisions for their own bodies no matter what age they are? Do you feel like this is a way to give kids an “out” to engage in sexual activity or is it a way to develop responsibility?