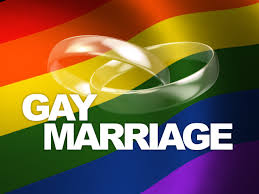 The biggest question is what will be gay marriage biggest oppose response be? The church clearly feels it’s an abomination for two men or two women to be together, that it is a choice that one makes and not how people are born. The homosexual community mostly feels as though they are the churches best supporters but get no love. Gays in the church is more than obvious and many are very active in the church! Then you have certain figure heads that are in a rock and a hard place. Take our president Barack Obama, He has half of the country screaming No to gay marriage and the other half screaming equal rights!

“We are a people who declared that we are all created equal, and the love we commit to one another must be equal as well,” Obama, the first sitting president to endorse gay marriage, said in a written statement. Opponents of same-sex marriage have said that they remain hopeful that they can mount a political comeback, much as opponents of abortion used Roe v. Wade, the 1973 Supreme Court decision, as a springboard to a more aggressive movement. Brian Brown, the head of the National Organization for Marriage, vowed Wednesday after the rulings to push for a federal constitutional ban on same-sex marriage.