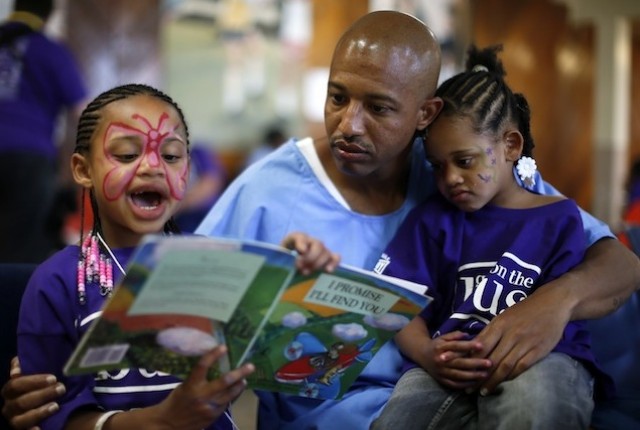 The long running children’s program “Sesame Street” debuted an episode that explained to kids in layman’s terms what it means to have a father or parent incarcerated. An issue that is clearly so dominant in society that children’s television is now having to explain what it means to not have a parent around due to imprisonment.

According to a 2010 study entitled The Pew Charitable Trusts, “over half of the 2.3 million people behind bars-are parents of children under age 18. This includes more than 120,00 mothers and more than 1.1 million fathers”. That’s just the general number of the fathers in prison but if you look at the Black community, half a million Black fathers are behind bars which makes up 40 percent of incarcerated parents.

If over a million fathers are behind bars, that means that even more children are left fatherless. It has really become somewhat of an epidemic to grow up in a single parent home. Yes, not all fathers are absent due to imprisonment but with over a million dads being locked up, we know that it’s a pretty common reason. As a society, we seem to have accepted it by doing things like only asking kids their mother’s whereabouts in times of trouble or assuming that a father is automatically absent when inquiring about family members. PTC reported that in the “U.S. one in 28 kids has a parent in jail and that that 25 years ago, that ratio was 1 in every 125”. Again, this more prevalent in the Black community with one in nine Black children having an incarcerated parent.

Another sad addition to this story is that many of these mothers and fathers committed non-violent crimes that took them away from their families.

As reported by The Pew Charitable Trusts:

While one- third of incarcerated parents are serving time for violent crime, the offenses of the other two-thirds were non-violent with more than one-quarter of all convictions coming from drug offenses. One percent of all children currently have a parent serving time for a drug crime.

I know that may have been a sour note for some of you but it’s still the reality we’re facing. For those of you that may have kids questioning the whereabouts of their father, here are a few tips on how to break the news.