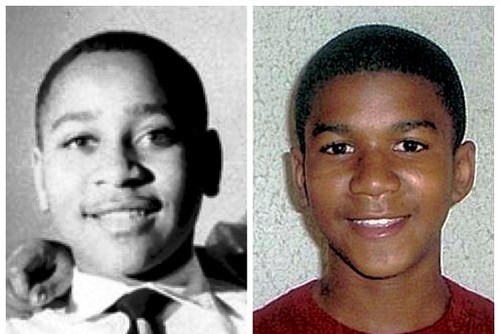 A lot of things are changing. The economy, Obamacare, church leadership and justice/liberty. Most African-American, where more than a little upset with the Zimmerman verdict and I must say that I was also. However, let’s look at this picture more globally, has anything really changed in America? It seems like the more thing advance, the more they really just revert back to the same old behaviors. After the verdict, my mind immediately went to Emmett Till. Is there really much difference between his death and Trayvon Martin’s death. Of course, the circumstances and the number of people involved are definitely considerations. However, overall we as a people are dealing with the same old inequalities and injustices when it comes to racism in America.

Have we come to a period in society where the African-American male has bercome oppressed and as a result,depressed? This is the question that I often ask myself. I must say, I had a terrible night last Saturday/Sunday morning after the verdict. It appears that America wants to tip toe around the race issue, but it is what it is and my name ain’t Rachel Jeantel. This young lady has been almost persecuted by the media because of colloquialisms that are used by our culture. No matter how you slice it, most of you reading this post could not have handled what this young lady went through the past several months.

Now, getting back to my question, “Are you depressed?” How many times have you been profiled, even in the grocery store or mall just because of the color of  your skin? How bout when you were pulled over because you were “driving while Black?” This has happened to me more than a couple of times. Now, do I support boycotting Florida?  I am not sure that this is the answer or if just more impoverished or low-income minorities will bee impacted. In  essence, racism is a live and well. We must take this issue by the head and kill it. Many young men are ow becoming afraid just to walk down there on city streets. We can not live like this people. Somethign has to change. What is event more ironic, we have our first African-American President and it appears that this issue alone has upset the status quo.

Brothers and sister, educate yourselves. Become slow to react and began thinking more and becaome about your surroundings. Don’t sweat the small stuff and just read more and stay aware of what is “Really Going-On.” I am certainly saddened by the brutal dealth of Trayvon, but I am sad to report that he will most probably not be the last. Now, in closing, I must say somethign about black-on-black crime/murders. This has to stop. By the way brother/sister, the drugs are not yours anyway.

Enough said and please don’t forget to forget your avid blogger, AskDrO GO out and purchase my book, “Am I in a Bad Relationship?” You just may learn something.