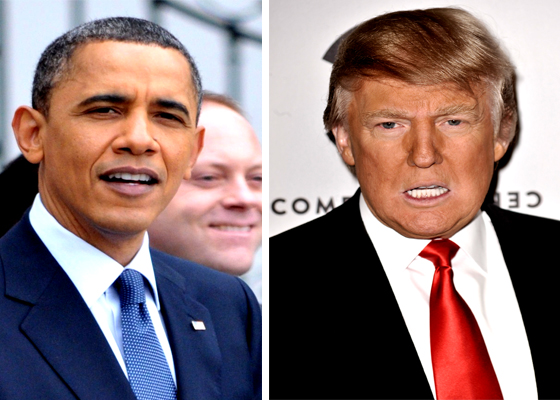 Trump wishes he could fire Obama! The millionaire Donald Trump gives President Barack Obama the boot in a “Celebrity Apprentice” parody video that reportedly cost $100,000 to make. The “Today” show aired a clip from the video in Sept. 2012 that organizers of the Republican National Convention declined to show attendees, but now the entire segment has now surfaced. In the spoof video, Trump brings Obama in to evaluate his performance during his first term in the Oval Office. “It looks like you’ve never really managed people before,” Trump tells an Obama stand-in. “Who hired you? You oversee budgets and you were never responsible for making a payroll or signing paychecks.”

After critiquing the president’s golf swing, Trump continues with his attacks on his presidential performance. “You had some clear objectives when you took the reins,” he says. “You promised hope and change … How did you do there?” A sound effect of crickets chirping answers the question. But Trump’s review of Obama is not entirely negative. “You’re a really good speaker,” the master of the boardroom tells the Commander in Chief. “I love the way you speak. But talk is cheap; we’ve got to get results.” Trump criticizes Obama care and the president’s record on unemployment. “There are fewer people working today than there was when you took office,” he says. “That’s a ‘change.’ So you were right about that.”

Trump goes on to slam Obama’s 2012 campaign slogan of “Forward,” reminding the then incumbent candidate it’s a better choice than having people look back on his record in office. “The fact is the American people want results,” Trump finally says. “President Obama, you’re fired!” It’s clear that he is still upset at our president, of course the president could do more but how far do you get when you don’t have any support!