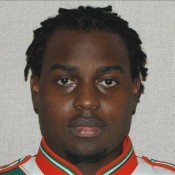 Sorority/ Fraternity hazing has certainly had a not so glamorous light shown upon over the past few years, due to the number of deaths that have resulted from hazing activities. Famed band and HBCU, Florida Agricultural and Mechanical University aka FAMU, was involved in one of those aforementioned hazing deaths when a member of their band, Robert Champion, died from injuries sustained from a beating for a popular hazing ritual conducted by the band. Now the time has come for those guilty parties to face the music.

According to The Huffington Post, one of the former band members  responsible for Champion’s death, Jessie Baskin, could face a maximum of 15 years in prison for manslaughter, but there is also the possibility that he could receive less time from a judge or the state. The other ex-band members involved have received community service, probation and lesser prison sentences.

Though Champion was hit repeatedly during the hazing, known as “Crossing Bus C,” none of his fellow band members admitted striking him. Prosecutors nonetheless have classified the hazing defendants according to their alleged roles, and most of those awaiting trial fall into the category of “beaters,” those who punched or kicked Champion as they tried to prevent him from making his way from the front of the bus to the back.

I realize that there are a number of young people that desire acceptance and long for a sense of “family” that they have lacked throughout their lives. I also understand that sometimes sororities and fraternities provide this missing link to those seeking it. However, is it necessary to haze people in order to form this type of bond? I mean we don’t initiate or friends, and we choose them. Most of these organizations have to select you in order for you to be a part. Don’t get me wrong, not all hazing is fatal or as serious as this, some organizations may only require that you wear or can’t wear certain colors or you have to endure some mild embarrassment for initiation but it should never go to the point wear the process of joining a voluntary group inflicts pain or causes death.

Huff Post reported that “Champion, 26, died Nov. 19, 2011 after a beating on a bus parked at the Rosen Plaza hotel where the iconic band was staying” and I’m sure Robert Champion wasn’t willing to end his life that day for the tradition of hazing.