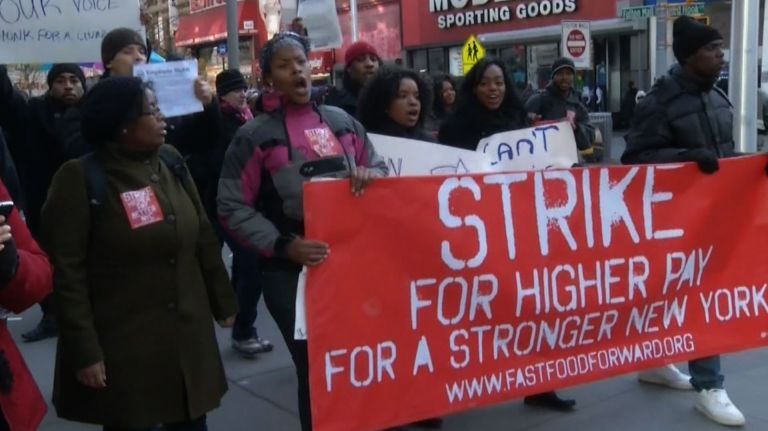 Thousands of fast food workers across the country are striking for better wages.
The workers, from chains including McDonald’s, Burger King, Wendy’s, KFC and Taco Bell want to make $15 an hour, which is about twice the average minimum wage. Fast food slows down in NYC as workers strike! The movement has mobilized on Twitter under the hash tag #iamfastfood.  “It’s noisy, it’s really hot, fast, and they rush you. Sometimes you don’t even get breaks. All for $7.25 it’s crazy,” is how one worker described the conditions that have caused her and the rest of America’s fast-food employees to go on strike today.

They were among hundreds of people who took part at locations throughout New York, activists said. Similar strikes were planned across the country this week, organized by the national Fast Food Forward campaign, which was launched last year to tackle stagnating wages and the proliferation of low-wage jobs as the nation recovers from the recession, said campaign director Jonathan Westin. The striking workers in Manhattan were joined by politicians and community leaders, including U.S. Rep. Jerrold Nadler, a Democrat who represents the district. He said the fact that the fast food industry is worth $200 billion a year and yet many of its employees still rely on food stamps and Medicaid is “disgusting.” A lot of the workers are living in poverty, not able to put food on the table or take the train to work,” Westin said.“They are striking because they can’t continue to maintain their families on the wages they’re being paid in the fast food industry.” Fast Food forward began as a local campaign in New York but the movement has spread across the country, and protests are also scheduled to take place this week in Chicago, Detroit, Flint, Michigan, Kansas City, Milwaukee and St Louis. With all this being said will these big corporations give in or will they start giving more jobs to lets say to teens or young adults ages 16-21.