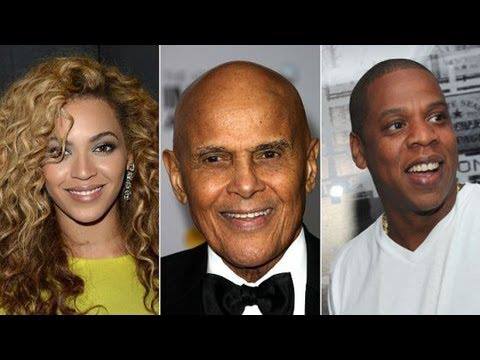 Nearly a year ago, Harry Belafonte criticized Jay Z and Beyoncé. Saying they’ve “turned their back on social responsibility.” Beyoncé’s camp responded with an “abbreviated list of the unselfish work Beyoncé has done and continues to do.” The list included a $100K donation made in 2008. The singer’s husband, Jay-Z, was noticeably quiet following the criticism. Until now the beef starts again. Jay-Z finally responded to the famed Civil Rights/entertainment icon in a record titled “Nickels and Dimes” on his highly anticipated Magna Carta Holy Grail album. The rapper addresses Belafonte in the second verse of the song, telling his elder to respect youngins’. According to reputable hip-hop decoding website, RapGenius.com, Jay-Z is telling Belafonte that he [Harry Belafonte] does not know what he has done for the community. Many feel that what Jay Z has to say is very disrespectful true he felt he had to respond but for him to say for an elder to respect the young guy and also in his lyrics to say “you don’t know shit I do for the homies” we know Harry Belafonte is very outspoken however, he didn’t’ say what he said in a disrespectful many but it can be received as disrespect if you don’ actually know the things Beyoncé or Jay Z has done socially for all their fans. So many call this Harry Belafonte and Jay Z inter-generational Beef Harry Belafonte Vs Jay Z! “This conflict was not from me as a direct attack on Jay Z and Beyoncé,” Belafonte recently told MSNBC, explaining that he was at a press conference in Switzerland when he was asked to compare today’s “artists and their social engagement” with how artists were acting earlier in his life.