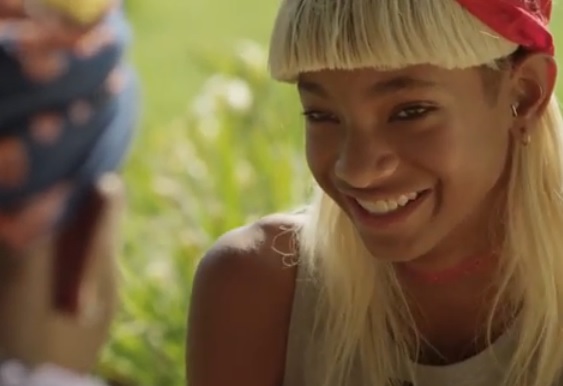 When you think about a summer fling, what’s the first thing that comes to mind? Sex, right? Well, how comfortable would you be listening to a twelve year old talk about her summer fling? Will and Jada Pinkett-Smith’s twelve year old daughter Willow Smith, just released a new music entitled “Summer Fling” where she sings about “good night kisses if the  moods right” and “it’s only for a couple months but we do it any way”.

Now, to play both sides of the fence, I can see how this video has been deemed inappropriate for some and just fun and harmless to others. First off, Willow is twelve years old, a pre-teen, a young minor. Second, while I don’t condone it, and I’m in no way implying that Willow distributes this behavior but I’m not oblivious to the fact that there some sexually active twelve year olds in the world. However, twelve is still a very young age for the weight and responsibility of sexual activity, so I can understand why some viewers may feel uncomfortable about Willow’s subject matter. To be honest, my face did wince a bit after hearing Willow sing “don’t really care what we do tonight good night kisses if the moods right”.

According to Yahoo! Music, psychiatrist Dr. Carole Lieberman said that “It is not age-appropriate for a 12-year-old to be singing these kinds of lyrics or to be involved in a scenario like this”. And even argued that while some may play it off as make -believe, there’s still a   “psychological impact on her”.

Yahoo! also reported that behavior specialist, Betsy Brown Braun, said  “My sadness over this is that people are going to look at these behaviors — singing about something that is emotionally too old for this child — and think it’s OK”.

On the other hand, others may feel it’s just a fun video with kids playing around, enjoying their Summer and whatever comes along with it. There are some child-like aspects to the video such as playing with fire crackers, speaking in accents and having fun in the pool but the elephant in the shoot that most people will refer back to is the fact that’s she’s 12 and singing about a fling, a word commonly associated with sex.

Parents, what are your thoughts on the video? Other readers, did this video make you uncomfortable or was this just an innocent, fun summer time video?

I’m curious to know what mama Jada will have to say on her Facebook page about all those hating on her daughter’s new song!