They say hell hath no fury like a woman scorned. Whatever Tim Duncan did to his soon to be ex Amy has her going for the jugular. The couple filed for divorce in March and now Amy is talking and she has some interesting allegations. Theurbandaily.com is reporting that throughout the marriage, Amy questioned Tim’s sexuality. The website posted this statement from its sources:

“Amy treated Tim like a bitch throughout their marriage because she knew he was fucking his BFF. Tim knows Amy was cheating on him but he’s willing to give her whatever she wants, because he doesn’t want Amy to tell the world that he’s bisexual.” 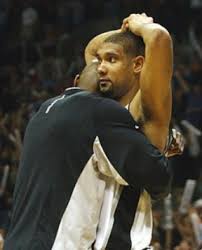 Rumor has it Tim met his “friend” while attending college and the two lived together for several years, including the first two years of his marriage to Amy, until Tim bought his “friend” a condo. It’s being reported that Amy is insinuating that his friendship was less of a bromance and more of a full blown romance to take away from her own infidelity. Perhaps this is just a ploy to get more alimony. Who knows?

Considering the severity of what Amy is alleging, you’d think Tim would respond, but he has yet to make a formal statement, although he is allegedly requesting a gag order for the duration of the divorce.

Tim is a 14 time All-Star, including two MVPs and a four time champion. Needless to say, he’s an accomplished athlete. With his track record, if he is gay, what’s the worst that can happen? Do you think Amy’s is exaggerating two men being bros just for more in the divorce or do you think Tim really is gay?