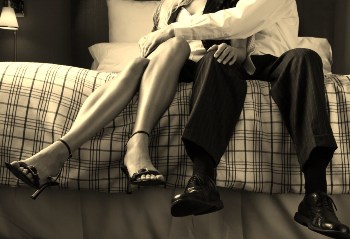 Some may genuinly beleive that having a man, any man, is better than having no man at all but does that rule of thumb apply if your man is actually someone else’s man? Are you currently seeing someone one casually or thinking about taking your relationship to the next level such as meeting the family or moving in together? The problem is that something’s holding you back but you just can’t put your finger on it. Could it be that he’s not fully committed to you because he’s already committed to somone else?

The signs of a cheater are obvious to some, while others are completely oblivious to them. A ring may not be present in situations like these, so you must develop a keener eye if you truly suspect something’s wrong. Acording to Madame Noir, there are nine ways to tell if you man, is somebody’s else’s man such as him “calling you from odd places”,  “he pays for everything in cash” and he doesn’t take the time to “intoduce you to anyone”. Here’s what Madame Noire had to say about sign number three, “Home Phone Numbers”.

As reported by Madame Noire:

When asked, he may tell you that he doesn’t have a home phone number and there’s really nothing outside of a thorough internet search or background check you can do to see if he’s telling the truth. However, if he admits to having a home number but says you don’t need it because he doesn’t use it, be suspicious. No married man is going to have his mistress calling his home for obvious reasons, so if you continually ask for his home number and he doesn’t give it to you, then something is up.

I agree with Madame Noire. If your man gives you any reason to be suspicious or acts like he’s hiding you in some way, this should raise a red flag. It’s a juggling act trying to balance two lives, so he’s bound to slip up somewhere. He may mention his wife’s name when he’s with you one day or mention your name to the wife in a heated argument or simply forget to cover all his tracks one weekend when he’s splitting his time between the both of you.

Here are some of the ways I identify if someone is being cheated on:

Take a minute to evaluate your current relationship. Do any of these examples named above apply to your significant other? Still not sure? If all else fails, you can always just ask them flat out “Are you married”? and watch how the story unfolds.