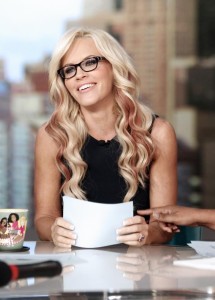 Jenny McCarthy has a diverse resume. From Playboy model to dating show host and author, the brash and often inappropriate bombshell seems to have made a career out of being unpredictable. As McCarthy prepares for her next gig, it seems the gravy train isn’t pulling into the station just yet.

The View, going into its 17th season, has seen a number of hosts come and go, most recently Elizabeth Hasselbeck (who left for an immediate position at Fox). Joy Behar announced that she will not be returning and Barbara Walters plans to retire next year. Walters confirmed that McCarthy will be filling one of the empty seats.

“We are delighted that Jenny will be joining us as a permanent co-host,” Walters says. She went on to say that McCarthy “brings us intelligence as well as warmth and humor. She can be serious and outrageous. She has connected with our audience and offers a fresh point of view.”

McCarthy has appeared on the show 17 times, including eight times as guest host. Fellow TV host Andy Cohen showed his support by sending this tweet, “Big Mazel to the great @JennyMcCarthy! #TheView is abt to get #cray.”

Not everyone is sharing in this happy moment announcement. McCarthy has made no apologies for her openness about what she feels is a link between child vaccinations and autism. As a result, some vaccination supports are taking to the web to express this displeasure with The View. “Congrats ABC for hiring vaccine crank Jenny McCarthy for her ‘outrageous… fresh POV’ [because] actual medical science is so stale and dull,” tweeted Time TV critic James Poniewozik.

Despite this feedback, McCarthy is focusing on the positive, tweeting, “Beyond grateful for your support tweets.” She is scheduled to start as official cohost September9th. There has yet to be an announcement who will fill the other vacant seat on the show.