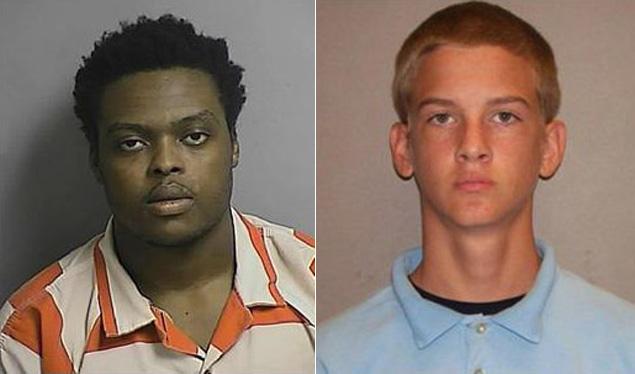 It’s safe to say that anyone who commits murder has some psychological issues either at the time of the crime or in general and this is especially true for those that kill for sport or just because they felt like it. Well, a  group of Florida teens  thought it would be fun to commit a couple murders.

According to The Daily News,  a group of four, two teens, one being 15 and two young adults, went on a two-week shooting spree and eventually took two innocent lives. 15 year old Konrad Schafer shown on the right, commited the first murder on his own and even confessed to authorities that he “thought it would be “fun” to shoot a person”. DN reported that Schafer supposedly shot a 17 year old in the back while he was walking to work at 6:30 in the morning.

The other two members of the group, along with Schafer and 20 year old David Damus, who pulled the trigger and is  pictured on the left, took out their second victim, a 22 year old male, after he paid for sex with the female group member. The 15 year old ring-leader supposedly slit the victims throat. After that, they robbed his house.

Here’s the doosie, the murder weapon used was purchased by Schafer’s  father for him to use at his lesuire the day before the shootings started!

Schafer, too young to even legally own a firearm, had his father buy the weapon last month. Lothar Hans Schafer Jr. told police the weapon and 100 rounds of ammunition were for his son, who “was having problems with unidentified suspects in Poinciana, Fla.”

Let’s pose a question here.  I realize that the allegded ring leader is a minor and that that mere fact alone will potentially affect how this case plays out. Now, race relations have been on the surface of everyone’s mind lately with the Paula Deen fiasco and the Zimmerman trial underway, so do you think this will also come up in this case?

Damus and Schafer both played a part in the second murder but will Damus  get a worse sentence then Schafer becuase he’s Black? It’s possible that the other two accomplishes could receive lighter punishments as they were not specificlly mentioned in the actual murders but between Damus and Shafer, will Florida’s judgment be fair despite the age difference? There have been minors tried as adults in the past for hanous crimes such as this.

Neither of the victims was belived to have had anything to do with the gang or offended them in anyway. How do you think this will “murder for fun” trial will play out in court? Zimmer is pleading self defense for his murder and still might get off and these kids purposefully ended two lives. Will the outcome of the Zimmerman trial affect how this one is ruled?