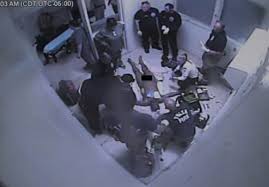 In the just over ten minute video above, onlookers slowly watch the last moments of Elliott Earl Williams’ life. According to Newsone, Williams was supposedly mentally ill and was suffering from a mental break down while he was in an Oklahoma, Tulsa County jail. Unfortunately, Williams did not receive the proper help during his time of need and died naked and sprawled out on a jail cell floor.

Newsone reported that “It was readily apparent that the suspect was having a mental breakdown. The suspect was rambling on about God, eating dirt” and that many other sources reported that Williams had a mental disorder but no one could confirm which one he suffered from. Although no sound can be heard, Williams is seen attempting to reach for food that was thrown at him and is clearly in some form of stress, while jail workers nonchalantly look in on him hours at a time.

As reported by Newsone:

The ten-minute video shows Williams, 37, being dragged into a medical cell on a blanket at 8:27 a.m. Oct. 25. It ends on Oct. 27, with jail staff first checking the bottoms of Williams’ feet for a response around 8:41 a.m. and returning at 11:04 a.m. to do CPR on him. Williams was eventually pronounced dead after Tulsa firefighters failed to resuscitate him.

I know the video moves sort of slow, but it really is a sad sight to see. The prison system is already over populated and minorities (Blacks and Hispanics) make up the majority of the group. It’s been reported that mentally ill individuals are  not always treated properly when they are in facilities such as prisons or nursing homes, so none of these factors are going in the Tulsa jail’s favor. However, Newsone did not report that any charges had been against the jail. A black, supposedly mentally ill inmate, died in the care of the state of Oklahoma and jail workers barley seemed concerned until it was too late. Do you think the fact that Williams received little to no help was because he was Black? Will this simply be swept under the rug because of that fact?