When a celebrity is in the limelight for all the wrong reasons, it’s important for him or her to tread lightly on social media. Apparently, no one told Paula Deen. An attempt to interact with her fans went horribly wrong when Deen tweeted, “My favorite potluck dish is ____? RT me your answers!” Sounds like a trap, right? Normally this wouldn’t be a big deal, but because of all of the recent controversy, she kind of set herself up to be teased…and boy was she teased!

Within a couple of hours the tweet was retweeted hundreds of times with each repsonse becoming more ridiculous than the one before. With replies like “Rodney King crab cakes”, “Massa-roni and cheese”, “Nigs in a blanket” and “Section 8-layer cake”, Deen and her team should have seen this coming. The only thing more disappointing than this irresponsible tweet was how long it stayed up. When the PR team saw replies, they should have deleted the tweet and attempted damage control. This leads one to wonder if her account was 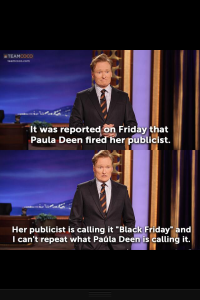 hacked or if she is just this careless.

The social network users arent’t the only ones making fun of Deen. Late night host, Conan O’Brien also took jabs at her during his monologue. Deen’s team has experienced some lay offs lately and O’Brien took this opportunity to get a few laughs. “It was reported on Friday that Paula Deen fired her publicist. Her publicist is calling it ‘Black Friday” and I can’t repeat what Paula Deen is calling it,” he joked.

It seems like Deen’s public image is still losing. In other news, water is indeed wet.